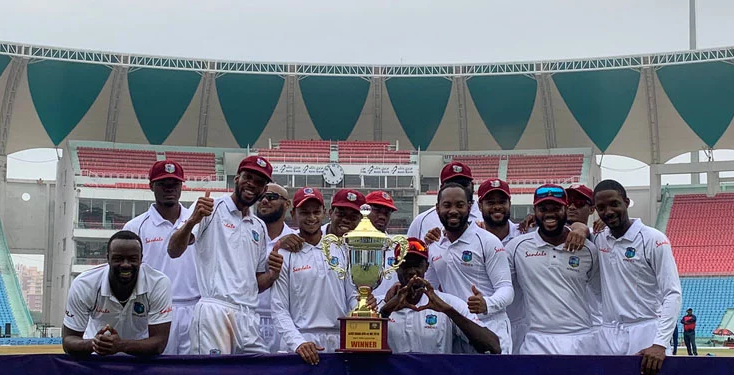 West Indies required just over an hour to thrash Afghanistan by nine wickets on Friday, and post an emphatic victory in the one-off Test at the Atal Bihari Vajpayee International Stadium.

The Caribbean side nabbed the last three Afghanistan wickets for 11 runs with fast-bowler and captain Jason Holder accounting for all, as the home side’s second innings folded for 120.

Left-handed opener John Campbell finished on a 16-ball unbeaten 19 which included four fours – the last of which was a belligerent punch over mid-off off left-arm spinner Amir Hamza to end the contest.

“We played a really good cricket game, and we were clinical. I asked the guys to make sure we don’t leave any stones unturned,” Holder said afterwards.

“Probably would have liked a little bit more in our first innings in terms of our batting, but we had a lead of 90. I think leads win games. Once you have a hefty lead, it puts pressure on the opposition.”

Off-spinner Rahkeem Cornwall, who on Thursday became the first West Indies spinner to claim a 10-wicket match haul on the subcontinent, was voted Man-of-the-Match.

“Great credit to Rahkeem, he was outstanding throughout the match and did everything we asked of him,” Holder noted.

“He’s new to Test cricket, this is just his second match and first away from home, and he bowled an exceptional spell in the first innings and then backed it up really well in the second innings, supported by the other bowlers.”

Resuming on 109 for seven – a lead of 19 runs – Afghanistan lost captain Rashid Khan in the second over of the day when he edged a defensive stroke at Holder’s first ball of the morning, and was caught at the wicket.

Wicketkeeper Afsar Zazai (7) and tail-ender Yamin Ahmadzai (1) resisted briefly before Holder (3-20) knocked them over in successive overs. First, he removed Ahmadzai’s off stump and then found Zazai’s outside edge for wicketkeeper Shane Dowrich to complete formalities.

Brathwaite’s slump in international form then continued when he gloved Hamza through to Zazai in the fifth over. The right-hander has scored only 67 runs from his last eight Test innings at an average of eight.

Campbell endured no such horrors and finished the game quickly for the Windies.