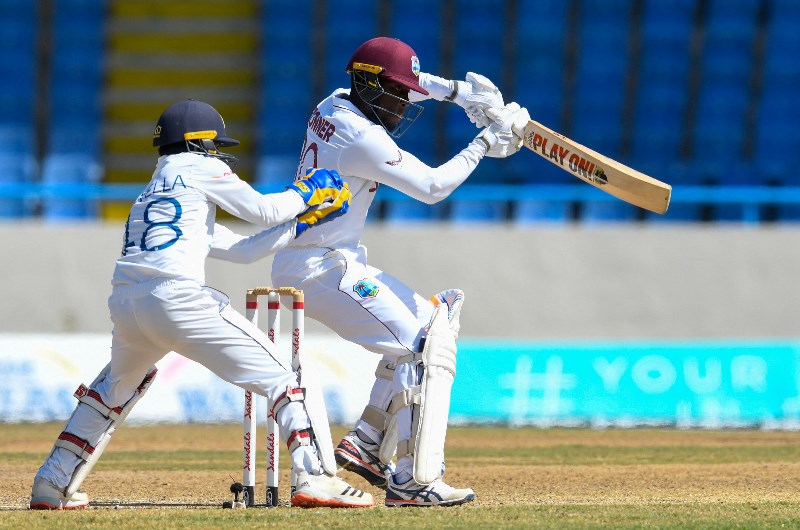 West Indies were hamstrung by the loss of strike bowler Shannon Gabriel and a docile pitch, and settled for a draw with Sri Lanka in the second Test in Antigua.

Gabriel limped off the field in the fourth over after lunch with a pulled hamstring and the Sir Vivian Richards Stadium pitch did not deteriorate significantly, and the Sri Lankans batted through the rain-marred final day to reach 193 for two in their second innings, having put away plans of chasing a victory target of 377 early.

Windies captain Kraigg Brathwaite delved deep into his bag of tricks to try to come up with the winning formula, but Sri Lanka captain Dimuth Karunaratne hit top score of 75 and Oshada Fernando enhanced his record with an unbeaten 66 to lead the defiance for the visitors.

The result meant that the two-Test series ended in a 0-0 draw, after the first Test ended in similar fashion two Thursdays ago at the same venue.

It also meant that West Indies failed in their effort to take hold for the first time since its inception six years ago of the Garfield Sobers-Michael Tissera Trophy, symbol of Test supremacy between the two sides.

The Windies were also denied a chance of moving up from eight to seven in the ICC World Rankings ahead of Sri Lanka, whose fifth trip to the Caribbean once again ends without an elusive Test series win in this part of the world.

West Indies endured a fruitless toil before lunch, after Sri Lanka continued from their overnight total of 29 without loss.

Play started 35 minutes later than scheduled because of rain and only two overs were possible before the weather again intervened with Sri Lanka 38 without loss.

The players returned to field 20 minutes later and Gabriel was left fuming, when wicketkeeper Joshua da Silva spilled a chance down the leg-side, after Lahiru Thirimanne, on 17, gloved a short, rising ball.

That was the closest the Windies came to a wicket before reached went into lunch on 93 without loss.

After lunch, Gabriel broke down, and Alzarri Joseph broke through for West Indies in the next over, when he had Thirmanne caught at first slip for 39.

The Windies endured another long wait before Kyle Mayers trapped Karunaratne lbw in the final half-hour before Sri Lanka reached tea at 146 for three.

After tea, Brathwaite tried to make things happen, but Fernando and Dinesh Chandimal, not out on 10, batted through until the two teams ended the match by mutual consent about 20 minutes before the regularly scheduled close.

Cases of a flesh eating STD on the rise in the U.K 0