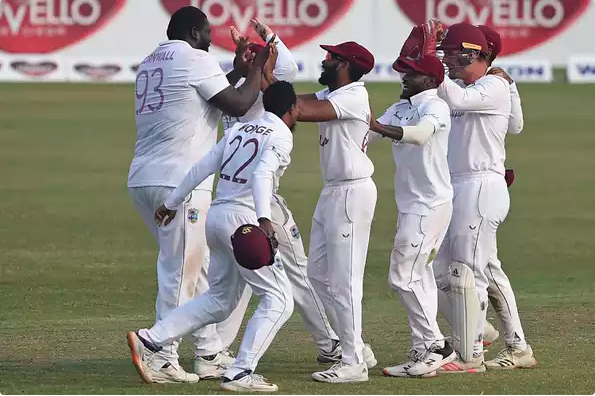 In a Test that witnessed its share of ebbs and flows, West Indies edged out Bangladesh by a mere 17 runs to clinch the series 2-0. Bangladesh could muster only 213 while chasing down a target of 231.

At 188 for 9, the West Indies looked set to wrap it up. However, there was some drama and action in the extended 30 minutes of play. Mehidy Hasan, the No. 8 batsman, decided to take the aggressive route and was also rewarded for his efforts. In the 59th over, he smacked Rakheem Cornwall for a six over long off and then used the slog sweep to collect a boundary. In the next over bowled by Cornwall, he once again cracked a six and a four to bring the equation to under 20 runs. However, Jomel Warrican sealed the deal for the tourists by removing Mehidy with Cornwall grabbing an excellent catch.

Earlier, the West Indies’ spinners had set up the win by running through the heart of Bangladesh’s batting line-up. In pursuit of a tricky target, Bangladesh’s openers played with positive intent. Tamim Iqbal in particular essayed a flurry of drives, lofts, cuts and the reverse sweep. Just when it seemed as if West Indies were on the back foot, Soumya Sarkar fell to Kraigg Brathwaite.

Despite losing his batting partner, Tamim didn’t change his approach and brought up his fifty with a boundary off Cornwall. Unfortunately for the home side, in the very next over, Tamim chipped one to Sheyne Moseley at short cover. To make matters worse for the hosts, Najmul Shanto too was dismissed on the brink of tea, inside-edging one from Cornwall to short-leg.

The final session didn’t start brightly for the home team, as Musfiqur Rahim fell early when he edged one behind. He placed his belief in the review but couldn’t get to overturn the call. Mohammad Mithun was the next batsman to be dismissed when he edged one to leg slip off Cornwall.

The pair of Mominul Haque and Liton Das then shared a timely stand of 32 to chip away at the target. With the West Indies in need of a wicket, Warrican got one to turn and bounce sharply to remove Mominul. Cornwall then took over by sending both Liton and Taijul Islam back to the hut. With the score reading 163 for 8, Nayeem Hasan and Mehidy strung together an alliance of 25 to keep the West Indies in the hunt before Nayeem was dislodged by Brathwaite. Eventually, Warrican provided the finishing touches to West Indies’ clinical effort.

The West Indies came into the series as underdogs after having lost the ODI series. The visitors also were missing some of their key players. But the relatively inexperienced bunch of players went on to post a memorable win in the first Test before triumphing in Dhaka.