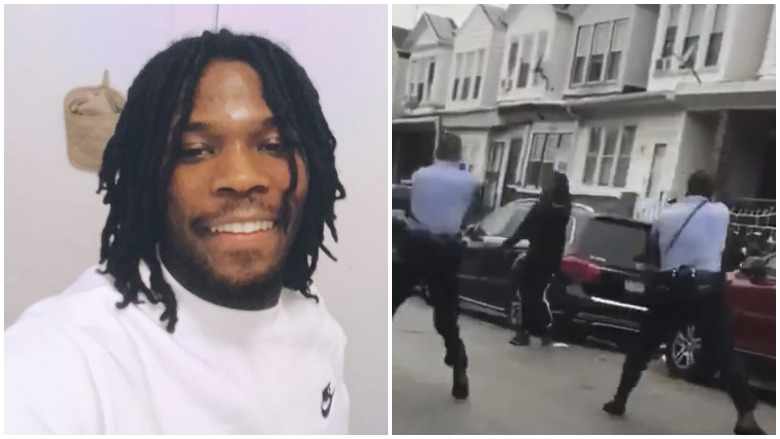 During the encounter, which was captured on video, both officers had their guns drawn as Wallace, who was reportedly experiencing a mental break, advanced toward the officers with a knife, though the knife is not visible in the video.

According to a report from the Philadelphia Police Department, officers made their way to the 6100 block of Locust Street in the Cobbs Creek neighbourhood of West Philadelphia after receiving a report about a man with a knife. A live video posted to Instagram on Monday afternoon by a bystander sitting close by in a car on the block shows what took place in the moments before officers fired their weapons.

During this time, Wallace’s mother follows Wallace in an attempt to shield him and stop him from advancing toward the police. Other bystanders scream for both Wallace and the officers to stop. Officers can be heard yelling, “Back off, man!” and “Drop the weapon!” Another bystander, a young Black man, follows behind Wallace before officers scream, “Move! Move! Move!” to him as they prepare to use their weapons.

Once Wallace is back in the street, each officer fires several rounds of shots; Wallace falls to the ground immediately. His mother and other bystanders run to his side, visibly angry with the police for shooting him. In the video, Wallace is seen standing several feet away from the officers when they shoot him.

“I’m yelling, ‘Put down the gun, put down the gun,’ and everyone is saying, ‘Don’t shoot him, he’s gonna put [the knife] down, we know him,’” Maurice Holloway, a witness, told the Philadelphia Inquirer.

“Why didn’t they use a Taser?” Wallace’s father, Walter Wallace Sr., told the publication. “His mother was trying to defuse the situation.” He added, “He has mental issues. Why you have to gun him down?”

Philadelphia Mayor Jim Kenney, who spoke to the family Monday night, said the video of the incident “presents difficult questions that must be answered.” The two officers, whose names have not been released, were removed from street duty and the PPD’s Officer Involved Shooting Investigation Unit has launched an investigation into the shooting, which Philadelphia Police Commissioner Danielle Outlaw said will fully address residents’ questions about the fatal shooting. Both officers were wearing body cameras.

Ahead of the unrest, Outlaw said she planned to join Kenney to meet with members of the community and members of Wallace’s family to “hear their concerns.”

“While at the scene this evening, I heard and felt the anger of the community. Everyone involved will forever be impacted,” Outlaw said.

Netflix May Be Expanding Into Video Games 0