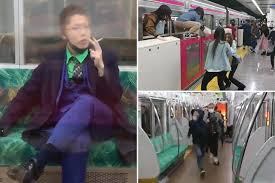 WATCH: Japanese man dressed as Joker goes on stabbing rampage on a train

A man dressed in Joker costume has been arrested for attempted murder after a knife and fire attack on a train in Tokyo.

According to Japanese media, at least 17 people were reportedly injured and one in serious condition after being stabbed.

Witnesses told national broadcaster NHK that the incident took place on October 31st, while revellers were in costume.

A video clip published by NHK showed panicked passengers running down the train as smoke filled the carriage, with flames also visible. Another video posted on Twitter showed people climbing through windows to escape the Keio line train at a station.

The perpetrator showed no emotion during the attack, a female passenger said.