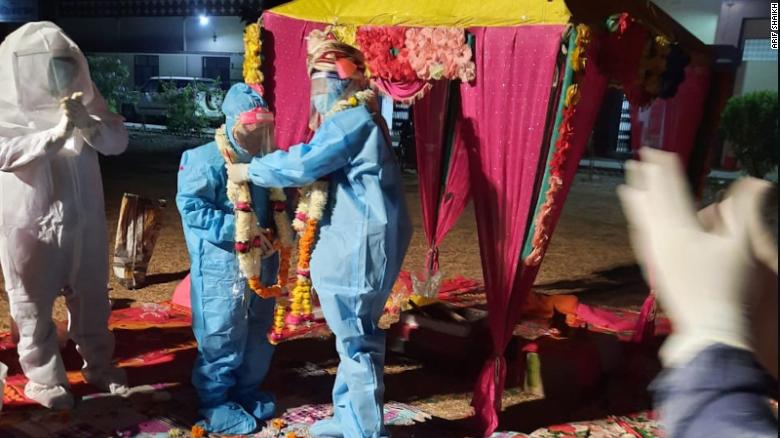 WATCH: Indian Couple Got Married in PPE at Covid Centre

A bride and groom in India made the choice to say ‘yes’ after the woman tested positive for the coronavirus on their wedding day.

The anonymous couple got married on Sunday at a COVID-19 quarantine centre in Baran, a remote village in the western state of Rajasthan, Reuters reports.

Hours before the planned festivities, the bride and a family member tested positive for the viral disease. Determined to say ‘yes’, the couple shifted gears and instead got married in the courtyard of the treatment center where the bride had been admitted, dressed from head to toe in personal protective equipment (PPE).

Watch the video below:

The priest and the lone witness were also in full PPE for the traditional ceremony, which was significantly reduced.

“We consulted the families and they agreed to get married in the quarantine center without any elaborate rituals,” health official Rajendra Meena told ANI news agency of the last minute change in plans.

After the wedding, the couple went into isolation at the Kelwara COVID Center, according to India TV.

According to Johns Hopkins University, India has reported the second highest number of coronavirus cases in the world behind the United States, with 9.7 million.

Many New Species Were Discovered in 2020 0