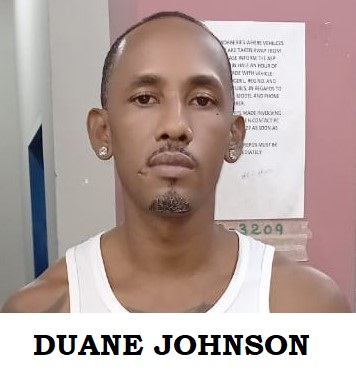 DUANE JOHNSON, of Mt Moriah Road, San Fernando, was today served with several outstanding warrants and is due to appear virtually at the Princes Town Magistrates’ Court.

A police report states that around 9.45 pm yesterday, whilst conducting a speed exercise along the Sir Solomon Hochoy Highway, Northbound Lane, Freeport, officers stopped a grey Nissan Note vehicle being driven by the suspect for exceeding the legal speed limit.

Further checks with the Central Division Operations Centre revealed that the suspect had ten outstanding first instance warrants for his arrest for sexual offences with a minor spanning from 2014 to 2016 in the Ste Madeline Police District.

The suspect, who has been evading police capture, was arrested and conveyed to the Mon Repos Police Station.

The exercise was supervised by Snr Supt, Traffic Branch, Wayne Mystar and coordinated by Ag Insp Harrylal.
Investigations are continuing.

Bar owner and patron kill bandit with their licensed firearms 0