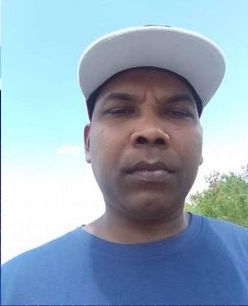 The Trinidad and Tobago Police Service is seeking the public’s assistance in ascertaining the whereabouts of 44-year-old ROGER BISSOO, who is currently before the courts on a charge of attempted murder.

BISSOO, whose last known addresses are Ramjohn Trace, Penal and Sam Avenue, Palmyra, San Fernando, was charged with attempted murder against a female victim, which occurred in February 2016.

He appeared before a San Fernando Magistrate to answer to the charge in September 2016 and was placed on $100,000 bail with surety.

Bissoo however, failed to appear in court for subsequent hearings and a warrant was issued for his arrest.
Several attempts to locate him have since proven futile.