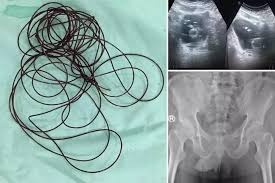 A 37-year-old man had to have a six-foot string removed from his penis after a sex game failed.

The man who is reportedly a virgin, got a six-foot string stuck in his penis during an attempt at a sex game.

The New York Post reports that the man reportedly inserted a nylon string, which is used for beading into his urethra while “fully erect and watching a pornographic video.”

After inserting the string, the man started to experience urination issues, blood showed up in his urine, and he had pain in his abdominal area. Doctors said the pain lasted up to two hours.