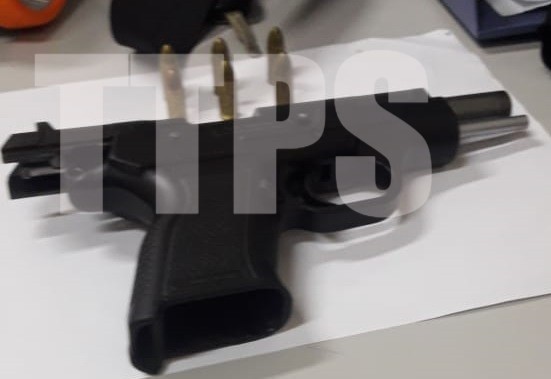 Venezuelans held with gun, ammo, drugs and US currency

Police are investigating two cases in which Venezuelan nationals were held with illegal items.

In the first instance, one Venezuelan national was detained by officers of the Emergency Response Patrol Unit, during an anti-crime exercise on Wednesday.
Whilst on patrol along Debe Main Road, officers had cause to search a suspect where they found in his possession, one Beretta pistol with 6 rounds 9mm ammunition.

Officers seized the gun and ammunition and the suspect was arrested and taken to the Barrackpore Police Station.

In the second instance, a Venezuelan national was arrested and quantities of cash and marijuana seized by officers of the Western Division, during an anti-
crime exercise conducted in the Four Roads district on Wednesday.

During the exercise, officers of the Western Division Gang Unit, acting on information, proceeded to the Four Roads district, where they had cause to stop and
search a red Nissan March motor vehicle with a lone male occupant.

The search resulted in officers finding a quantity of marijuana, hidden inside the vehicle. Officers also found a black gift bag containing TT$67,000 and US$1,320 in cash under the driver’s seat of the vehicle.

The money was seized in accordance with Section 38 of the Proceeds of Crime Act, Chapter 11:27 and handed over to the Financial Investigations Branch for further enquiries.

The driver, a Venezuelan national who resides in Barataria, was arrested in connection with the finds.

Investigations are ongoing in both cases.