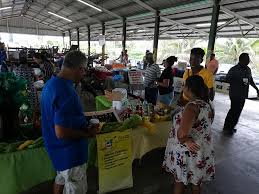 Citing major safety concerns, wholesale market vendors at the Macoya market are calling for an urgent meeting with the National Agricultural Marketing and Development Corporation (Namdevco) and the mangers of the market.

In a letter sent to Namdevco’s chief executive officer, via their attorney, Richard Jaggessar, the vendors said that besides the day-to-day operations of the market facility, they need to discuss increased security, the placement of CCTV cameras, point of sale banking machines, and staggered hours of operation.

The letter was copied to the Ombudsman, Equal Opportunity Commission and the Ministry of Agriculture.

It noted that the Macoya market opens Monday-Friday at 3am, and 5am on Sundays and the average buyer is sometimes camped out before opening hours waiting to spend tens of thousands of dollars in cash.

They said there is one police officer assigned to the facility, and there is no way for them to notify the officer or raise an alert in the case of emergency.

The group would also like the establishment of a mixed committee of market managers, buyers and vendors to deal with disciplinary matters and concerns.