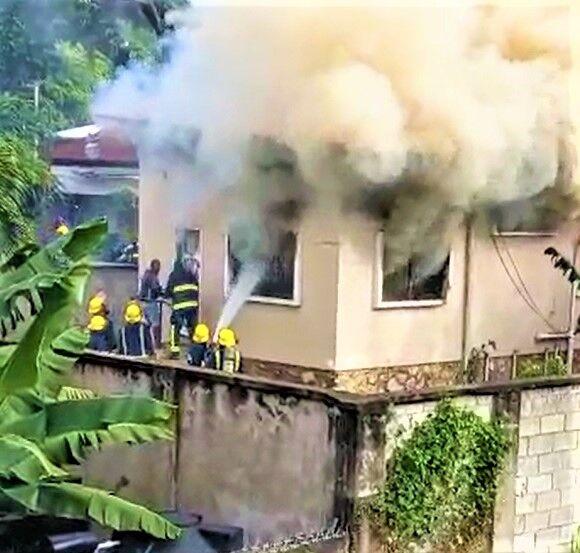 UPDATE: Police probe deaths of 3 children by fire in Maraval

Police are investigating a report of a house fire at 9A Rookery Nook, Maraval, this morning, which claimed the lives of three children and caused injury to a Police Inspector.

Around 8:10am on Monday 26th July 2021, officers attached to the St. Clair Police Station under the supervision of acting Insp. Farrell, responded to a report of fire at Rookery Nook, Maraval. On arrival, the police officers met FSSO CASTILLO and a team of Fire Fighters from the Wrightson Road Fire Station. They observed smoke emanating from a dwelling house on the eastern and western sides of the house. They also heard screams coming from the building. The Fire Service proceeded to extinguish the fire. First responders on the scene were Inspector Dirk John and a party of officers from the Maraval Police Station who assisted in efforts to rescue the children trapped inside the house.

Inspector John sustained an injury in the process of the rescue efforts. When the police officers entered the house, they observed the bodies of two children both lying on the floor and burnt beyond recognition. On making further checks, another body was seen lying on the floor in the patio which was secured by way of wrought iron burglar proofing on the north-western side of house. That body was also burnt.

The DMO Dr. Sangamreddi visited the scene, made pronouncements and ordered the removal of the bodies for post-mortems. Visiting the scene were ACP Yusuf Gaffar, ASP Walker, Inspector Sooklalsingh, Sgt. Khan, acting Sgt. Harripersad, and Acting Sgt. Seelal-CID, along with Sgt. Seecharan and Cpl. Garcia from Homicide Bureau, Region 1.

Inquiries revealed that there were five children in the house during the fire. Two of them were rescued. The dead children were identified as Ezekiel Burke, 17, Faith Burke, 6, Kayden Burke, 3. The children who survived were Jeniceia Burke, 15, and Kiseane Burke, 13. WPC Jack-George is continuing investigations.