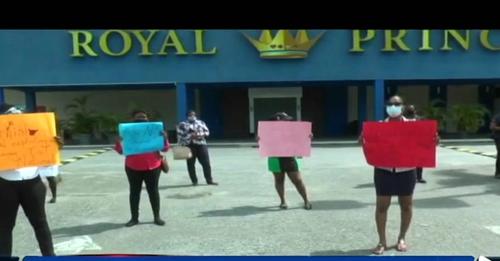 Workers from the Royal Princess Casino in South Trinidad staged a protest outside the establishment on Friday, after they were asked to take a leave of absence.

This comes mere days before the planned rollout of ‘safe zones’ and the reopening of their sector.

The workers said they have been told that only vaccinated workers will be allowed to return and those who are not will be sent on leave.

The employees say they are now unemployed because they have chosen not to be vaccinated against the Covid-19 virus and insist they will not be forced into vaccination.

The workers said they have also asked for their “holiday money” or some sort of separation package based on the years they worked and were told that this could not happen.

In an interview with GML, one worker stated that, “What we want is what is rightfully ours. We want our holiday money and the monies that are owed to us.”

If the issue is not rectified, the workers said they will seek legal advice and take the matter before the court.

Loading...
Newer Post
Curepe to Chaguanas taxi fares to increase from Monday
Older Post
Physical classes for vaccinated students in Forms 1 to 3 in a few weeks

Confederation of Regional Business Chambers troubled by the lockdown measures 0