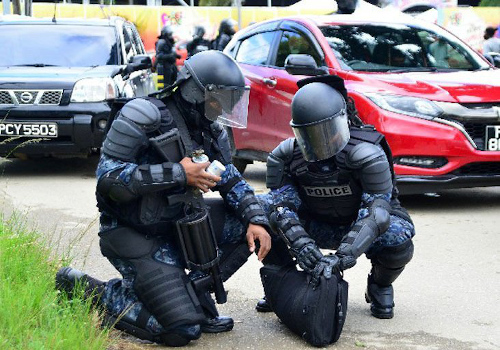 Government is taking the country along a dangerous path from which there may be no return.

So said the women’s arm of the United National Congress (UNC), who is accusing the Prime Minister of oppressing and provoking citizens.

In a statement to the media on Sunday, the group said no one elected the Prime Minister to tear-gas them.

Here is the full release from the UNC Women’s Arm:
On Sunday January 16, 2022, the country looked on in horror with scenes resembling Venezuela as tear gas was used to disperse a small gathering of peaceful protesters at the Queens Park Savannah.
As images and video footage emerges of the event, we saw heart-wrenching reports of young children and women being tear gassed. One video clip showed a young lady crying while telling her story of driving around the Savannah with her kids going about her normal business. Suddenly her vehicle was tear-gassed and she couldn’t breathe.

Another video clip showed a young lady walking along the pavement with her two kids and they were tear gassed as well.,
Numerous video clips show tear gas being discharged indiscriminately among ordinary citizens just going about their daily lives.

In an article published by Forbes on November 27, 2018, titled “Tear Gas Is Especially Harmful To Children – Here’s Why”, Colleen Craft, MD, FAAP, President of the American Academy of Pediatrics (AAP) was quoted as saying “The use of tear gas on children—including infants and toddlers in diapers—goes against evidence-based recommendations, and threatens their short and long-term health,”

“Children are uniquely vulnerable to physiological effects of chemical agents. A child’s smaller size, more frequent number of breaths per minute, and limited cardiovascular stress response compared to adults magnifies the harm of agents such as tear gas,” she added.

What is even more frightening is the callous response by PM Keith Rowley when asked about the authorisation and use of tear gas; PM Rowley chooses to blame parents rather than caution the TTPS.
The UNC had been in government twice, 1995 – 2001, the Basdeo Panday administration faced many demonstrations, some led by Errol McLeod, former President-General of the Oilfields Workers’ Trade Union (OWTU), and Jennifer Baptiste-Primus former president of the Public Services Association (PSA) who famously said she would hot up the place “Hotter than ah chulha”.

Likewise, Mrs. Persad-Bissessar’s Administration 2010 – 2015, faced many demonstrations, some led by Keith Rowley himself: they dragged mannequins, blocked roads, burned tyres, led a hunger strike in front of the PM office for months, demonstrated in front of Mrs. Persad-Bissessar’s home. You name it, they did it, and at no point in time tear gas were used against protesters.

The Women’s Arm strongly condemns the use of tear gas by this dictatorial Rowley-led regime against the citizens of Trinidad and Tobago, and especially women and children.

Keith Rowley and his government are taking us down a dangerous road that we may never return from; he must stop oppressing and provoking the people. No one elected him to tear gas them.
National Women’s Arm
United National Congress

US Vows to Cooperate With Haitian Prime Minister 0