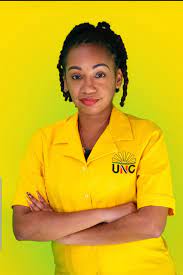 UNC Senator David Nkahid is being defended by his party colleague over what people have described as an offensive comment directed towards President Paula-mae Weekes.

In a Facebook video this week, Senator Nakhid referred to the President as an “insipid jackass”.

News Power Now reached out to various senior female figures within the UNC for comment on Senator Nakhid’s description of the President and the resulting fallout.

However, they claimed to be unaware of his exact comments as they have been preparing for the marathon sessions in Parliament this week as the Standing Finance Committee pours over the 2022 national budget.

Chairman of the UNC Women’s arm, Kenya Charles was the only recognized female UNC figure with whom we spoke who offered an opinion on the matter.

She told News Power Now that she did not agree with claims that he was disrespectful to the President.

She suggested that Senator Nakhid simply addressed what is a key issue, in his own way and the way in which it was delivered should not diminish the importance of the issue.

Israel Razes Most of Palestinian Bedouin Village in West Bank 0