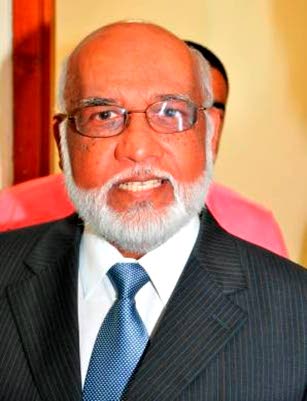 The United National Congress said it is remarkable, to say the least, to see how the media are legitimising Nizam Mohammed as a commentator on the Police Service Commission.

Kirk Meighoo said that Mohammed was criticised by the Joint Select Committee, by his fellow Commissioners at that very sitting, by his Cabinet and Parliamentary colleagues, by the five political parties of the People’s Partnership coalition, by the Police Executive (who came out publicly against a PSC chairman for the first time in this country’s history), and by the then-Opposition Leader, Keith Rowley. Mohammed has not apologised for his statements.

“On 27 June 2021, Newsday had asked Mohammed for his opinion on the amendment which was supposed to make it easier for Gary Griffith to stay on as Police Commissioner. Mohammed told Newsday he agreed with the amendment, including the now-infamous Paragraph 4. That amendment was wrong in law and has now been struck down by the courts.

Meighoo further stated that in relaying Mohammed’s erroneous opinion at the time, Newsday rightly noted, “Mohammed was chairman of the commission from July 2010-April 2011. His appointment was for three years, but he was removed after a year after making insensitive comments about the racial composition of the hierarchy of the police service.”

The release further noted that after that opinion, Mohammed came out publicly criticising Kamla Persad-Bissessar through an article published in the Guardian on 22 September 2021. Quite notably, in that article Mohammed staunchly defended the now-discredited Police Service Commission led by Bliss Seepersad. He attacked Kamla Persad-Bissessar for highlighting the likelihood of political interference in the Commission and for seeking answers and accountability from the Commission. After Mohammed’s defence of the Commission, all the members subsequently resigned amidst disgrace and controversy. Mohammed was obviously on the wrong side of history again, for a third time.

Remarkably he said, the Guardian printed Mohammed’s defence of his prematurely terminated Chairmanship, but did not mention the reason why President George Maxwell Richards removed him — for his own improper, racially divisive statements. That crucial fact was mysteriously left out of the story.

Meighoo said “This whitewashing of Mohammed’s past seems to be repeated by Newsday. In the article published on 14 October 2021, Newsday not only gives Mohammed’s opinion precedence over Ramesh Deosaran, they now erase from his history that Mohammed was fired for his racially divisive comments as PolSC Chairman. Newday instead includes less relevant — but more legitimising — background information, stating, “Mohammed was PSC chairman around 2010. He had previously been elected MP for Tabaquite and served as Speaker of the House of Representatives from 1987 – 1991 under an NAR government.”
This biographical change is remarkable indeed.

Meighoo is now asking the question: Has the media now changed their minds on Mohammed’s racially divisive statements, which they led the nation in condemning? Do they now believe Nizam Mohammed’s racist view that the Police Service Commission should redress the over-representation of Afro-Trinidadians in the TTPS? Do they now disagree with Kamla Persad-Bissessar who criticised Mohammed’s view and held Mohammed accountable for it? It would be interesting to know.

“However, I suspect that the media has not changed its mind. Instead, this fits into an obvious pattern of media behaviour. We see this in the treatment of former MPs whose views are now regularly sought, and may perhaps even be columnists now, even though while they held their substantive posts under Kamla Persad-Bissessar, their opinions were not solicited, and neither did they have much to share with the national community.
It is clear. Once a disgruntled member or former associate of the UNC is willing to publicly criticise the party, and the Leader, it appears very easy to get the ear of the media and use its national platform to spread that message. No matter what one’s past is, it can be forgotten, buried, or ignored, as long as the anti-Kamla Persad-Bissessar message gets out.”

Meighoo said Mohammed is not a disinterested or fair-minded commentator. “This is also true for the other disgruntled associates, now elevated on national media platforms.”

“It is our view that the use in the media of discredited and dishonourable people like Nizam Mohammed — with a track record of defending the wrong side — on important national topics does more harm than good. It appears obvious that the media is willing to look past his discredited behaviour once he is supporting the PNM.
“Nizam Mohammed instead should himself take a step in the right direction for his own transgressions and fix himself.”