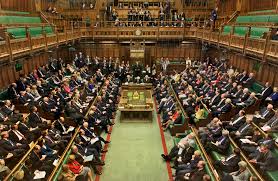 Boris Johnson is back in the UK and preparing for a face-off with MPs in Westminster after his decision to suspend parliament was ruled ‘unlawful’.

Eleven judges at the UK’s highest court unanimously deemed the five-week suspension ‘void and of no effect’ yesterday with MPs being immediately called back to their posts.

The House of Commons opened again this morning, with the prime minister expected to make a statement on the supreme court judgement this afternoon. Mr Johnson’s RAF flight arrived in London a little over an hour before the scheduled reopening of the Commons at 11.30am. Commons Speaker John Bercow re-opened parliament by saying: ‘Colleagues, welcome back to our place of work.’

Mr. Bercow updated the House about the Supreme Court ruling and said he would make sure the previous prorogation was ‘expunged’ from records and instead is listed as an adjournment. He added: ‘I will arrange for the citation for that judgement to be entered in the journal of this House and accordingly direct that the item relating to the prorogation of Parliament in the journal of Monday, September 9th is expunged and the House is instead recorded as adjourned at the close of the business.’

Mr. Bercow thanked Commons staff for working ‘exceptionally hard over the past 24-hours to prepare for this resumption’. Attorney General Geoffrey Cox said the government accepts the supreme court judgment, but insists the government acted ‘in good faith’. He told the Commons: ‘If every time I lost a case, I was called upon to resign, I would probably never have had a practice.’

He continued, ‘The government accepts the judgment and accepts that it lost the case and, at all times, the government acted in good faith and in the belief that its approach was both lawful and constitutional. ‘These are complex matters on which senior and distinguished lawyers will disagree.’

The bombshell legal ruling was a humiliating blow for the PM, who was in New York to attend the United Nations General Assembly. The Prime Minister faced demands for his resignation from furious opposition parties determined to hold him to account over his Brexit plans.

Downing Street insisted there was no question of him standing aside, despite the Supreme Court ruling there was no ‘reasonable justification’ for his advice to the Queen to prorogue parliament for five weeks.

The row dragged the Queen into Westminster’s bitter Brexit battle, but speaking this morning, senior cabinet minister Michael Gove refused to apologise for the unlawful suspension of parliament. Mr Gove acknowledged there had been ‘heated responses’ to the ruling but said he ‘did not recognise’ reports that Commons Leader Jacob Rees-Mogg branded the court’s actions a ‘constitutional coup’.

WATCH: Torrential rain in SVG leads to mudflows in the red and orange zones 0