The United States intends to charge tariffs on products imported from several European countries due to the dispute with the European Union over state aid granted to Airbus.

Donald Trump’s administration has already placed the document in public consultation detailing the tariffs it intends to implement and which are levied on goods worth US $ 3.1 billion that are imported from France, Germany, Spain and the United Kingdom. These are the countries that gave aid to Airbus that the World Trade Organization (WTO) considered illegal.

In October, the US had already advanced with tariffs on goods worth 7.5 billion dollars due to this case and now intend to charge even more.At issue are tariffs on goods such as olives, beer, gin and trucks. And also an increase in tariffs already in force on aeronautical components, cheese and yogurt, says Bloomberg, who cites the document that will be in public consultation until July 26.

This US initiative (which is not yet final) was already expected in some way after negotiations between the country and the European Union collapsed over this historic dispute at the WTO over subsidies granted to aircraft manufacturers.

A tariff war between the two blocs is now expected, as the European Union should also soon receive a green light from the WTO to move forward with tariffs on US products due to aid to Boeing, which were also considered illegal.

The sharpening of relations between the two blocs is already evident in the trading of the markets this Wednesday, with European stock exchanges marking losses around 2%. 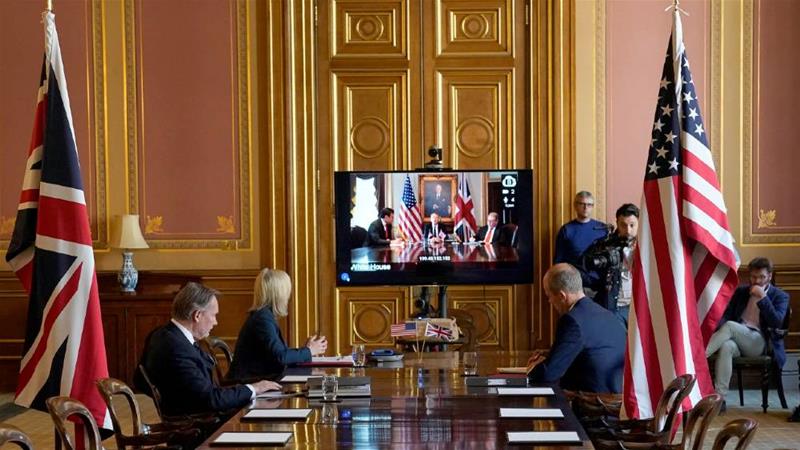 The process that the EU has to run in the WTO in which it disputes the legality of the subsidies granted by the United States to the American Boeing should be decided as early as July.

If the WTO is right for the EU – as it did for the United States in the case of support for Airbus – the bloc could move forward with tariffs of billions of euros on US exports as of next month.

The aim of the negotiations between the EU and the US, which reached an impasse earlier this month, was precisely to prolong a truce reached in July 2018 and prevent this tariff war. However, European Trade Commissioner Phil Hogan has already said that the attention in Washignton is focused on the presidential elections and on combating the effects of covid-19, so any solution should only be reached after November.

Washington has “backed down” in negotiations in recent weeks, confirmed Phil Hogan at a meeting with trade ministers in Brussels on 9 June. “We have to see that the US is now in a pre-election phase, so political attention in Washington is much more focused on the immediate challenges in US domestic politics, such as the need to deal with the covid-19 outbreak.”

If Hogan’s expectation is fulfilled, the WTO will give the EU the green light to impose tariffs on goods imported from the United States, after, in October, also giving the United States “ok” to impose tariffs of 7.5 billion of dollars on European imports, in the context of a parallel process, in which Washington contested the legality of the support granted to Airbus.

If it gets the green light from the WTO, the EU intends to even move forward with retaliation tariffs on the United States, as confirmed by the European Commissioner.

“I am sorry that the United States has stepped back from negotiations in recent weeks,” said Hogan. “The positions, therefore, are still quite distant. If that is the case, the EU will have little choice but to exercise its retaliation rights and impose our own sanctions in the Boeing case, once we have authorization from the WTO.”

Paco, the macaw that was shot at, has died

China Threatens Visa Restrictions On US Officials Over Tibet

Paco, the macaw that was shot at, has died

China Threatens Visa Restrictions On US Officials Over Tibet

Paco, the macaw that was shot at, has died 0

China Threatens Visa Restrictions On US Officials Over Tibet 0