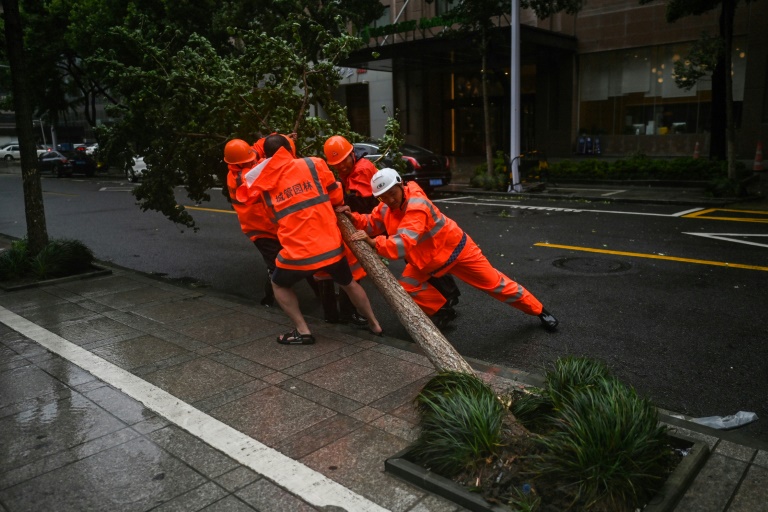 Typhoon In-Fa, known in China as Yanhua, made landfall in the city of Zhoushan at 12:30 local time (04:30 GMT), state media reported.

Transport links are suspended and people have been told to stay indoors.

Trees have been uprooted and there has been some flooding. Dozens of ships have been evacuated from a busy port south of Shanghai.

However, there have as yet been no reports of major damage.

The typhoon follows a period of historic flooding that caused widespread damage and killed at least 58 people in central China.

Emergency crew are still working around the clock to rescue survivors and provide aid to the tens of millions of people affected by the floods.

Typhoon In-Fa could bring more torrential downpours to the stricken region in the coming days, and officials fear it could hamper rescue and recovery efforts.

The typhoon reportedly has wind speeds of up to 137 km/h (85mph) according to Reuters news agency.

Japan’s Meteorological Agency forecasts the storm will track west towards the city of Hangzhou.

It added that coastal areas “should guard against the combined impact of wind, rain and tides”.

In Shanghai – China’s biggest city – some public parks and museums have been shut.

This week’s flooding in central China has raised questions about preparations for extreme weather events in the country’s major cities.

As Typhoon In-Fa hits China, another tropical storm in the region is threatening to bring heavy downpours and strong winds to the Tokyo Olympics in Japan next week.