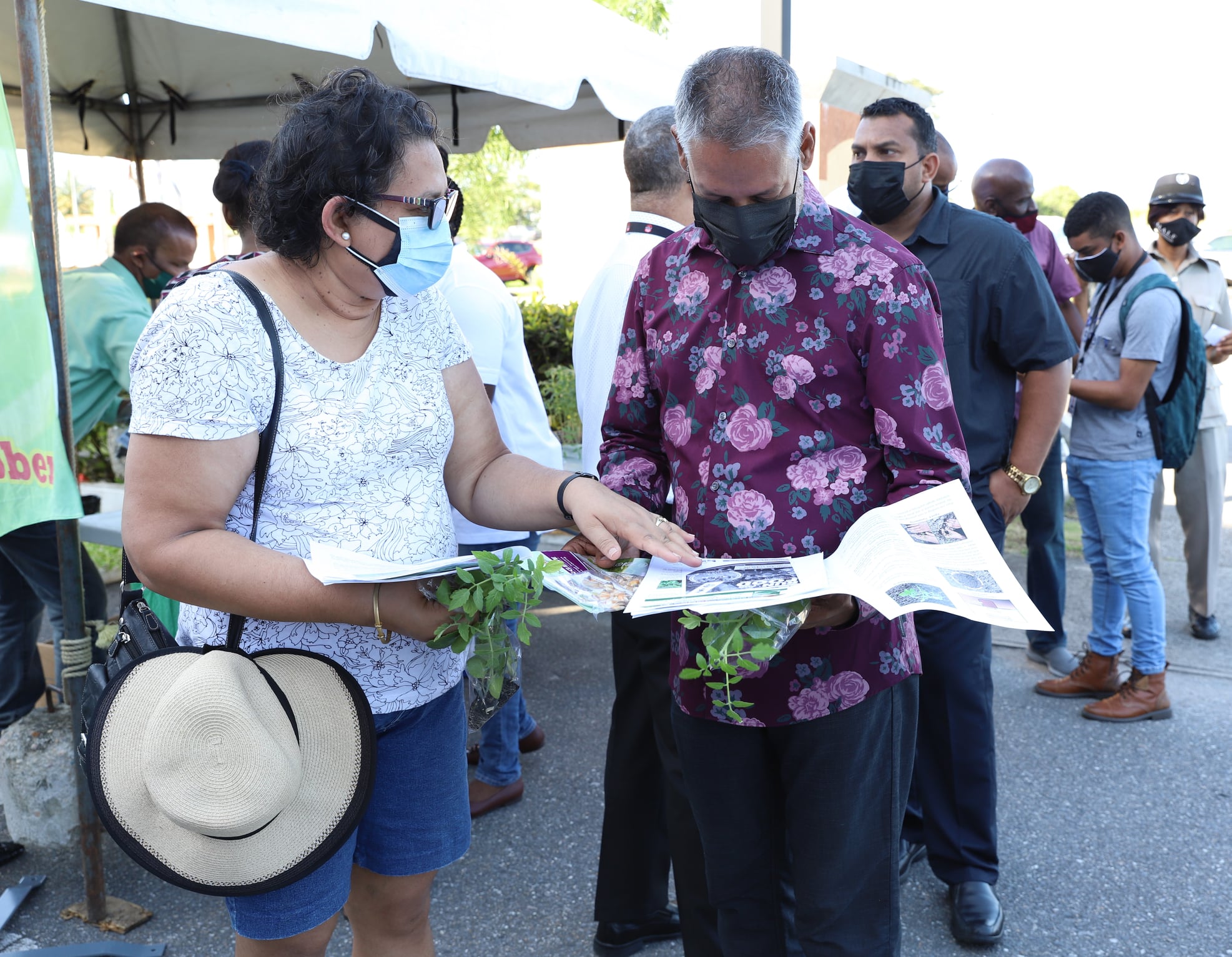 With a distribution of seeds and seedlings to more than five hundred (500) patrons of the Chaguanas Farmers’ Market earlier today (16/10/2021), the World Food Day National Committee of Trinidad and Tobago (WFDNCTT) would have fulfilled its objective of achieving food security by encouraging persons to grow their own.

Such were the echoed sentiments of the Chair of the WFDNCTT, Ms. Wilhelmina Kissoonsingh, as she outlined, the purpose behind her Committee’s presence at the market at the Head Office compound of the Ministry of Agriculture, Land and Fisheries (MALF), as well as its (WFDNCTT) many undertakings in commemoration of World Food Day (WFD) 2021.

She said that in light of this year’s WFD theme – ‘Our actions are our future – Better production, better nutrition, a better environment and a better life,’ there was no better time than now to engender upon the nation’s citizenry, a culture of self-sustenance through meaningful food production. For this reason, the WFDNCTT’s distribution of seeds and seedlings were accompanied by pertinent literature which also served to guide home gardeners and prospective home gardeners on how best to engage in the business of agriculture. 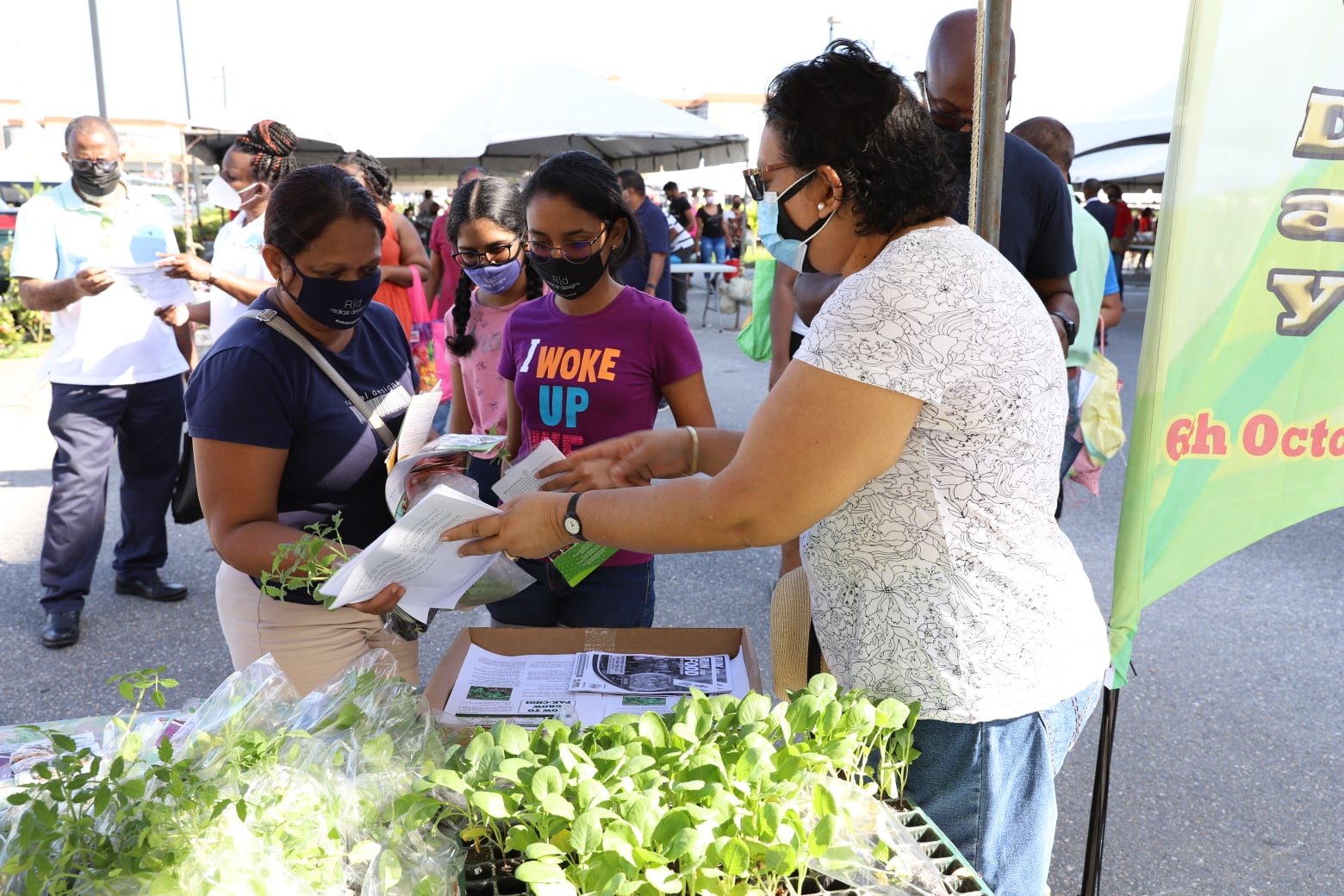 Patrons of the farmers’ market were treated to a wide variety of seedlings (pakchoi, cauliflower, melongene, tomatoes, cabbage) and seeds (corn, pigeon peas, melongene, ochro, bodi and pumpkin), with some of the early-bird market shoppers, benefitting from some overgrown, chataigne plants, which were also distributed free of charge.

On this latter disbursement, Ms. Kissoonsingh expressed a tremendous sense of gratitude to MALF’s Research Division for the donation of the chataigne plants which she noted had been well-received by patrons, as it was a variety not readily accessible for purchase by farmers. She said of the overall experience at the market: “The feedback from today was extremely heartening as many seemed genuinely enthusiastic to receive the plants, seeds and seedlings, even if it meant standing in cue for extended periods of time, even after they had just completed their routine market errands.” These said patrons she added, also engaged with members of the WFDNCTT on several gardening tips and advice on best practice and were often redirected to MALF’s website and the social media outlets of MALF’s Extension, Training and Information Services (ETIS) Division.

Also taking the opportunity on World Food Day (16/10/2021) to touch on the WFDNCTT’s commemoration, Ms. Kissoonsingh urged persons of the need to participate in this year’s installment of Run for Food – the popular 5K Walk / Run charity event hosted by both Massy Stores and the WFDNCTT – which for the first time since its commencement back in 2016, will be hosted virtually (click here to register:- https://bafasports.com/runforfood). She added too that the locally and regionally acclaimed event – which traditionally comprised a course along the Queen’s Park Savannah in Port of Spain in addition to a Zumba “cool-down” session – had to take a different route in light of the pandemic and its associated health concerns.

Ms. Kissoonsingh also lauded the participation of an unprecedented twenty (20) schools in this year’s ‘plant torch’ activity which – like this year’s Run for Food activity – will also be hosted virtually. The activity, which will commence from early as next week, will involve the nurturing of a mammy apple plant by 4H students within a specific period, during which, they will be required to document their experiences through the production of jingles and various forms of artistic expressions which will then be assessed and awarded through a competitive process.

In addition, Ms. Kissoonsingh hinted at the WFDNCTT’s desire to showcase a virtual exhibition involving agri-business entrepreneurs within the next few weeks and of its future plans to host an interactive and engaging panel discussion on a topic associated with this year’s WFD theme, in keeping with the level of public interest and success garnered from its prior, ‘Food Price Challenge’ webinar hosted in March of this year.