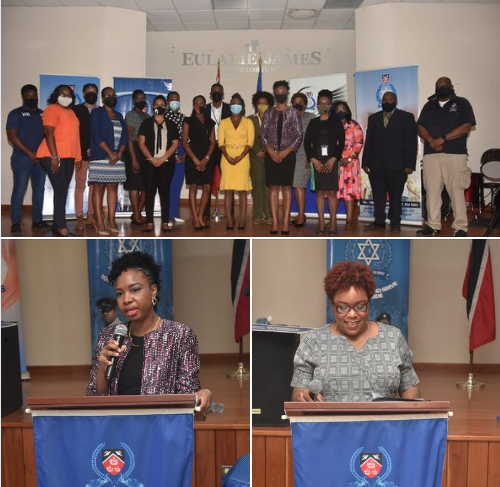 The Victim and Witness Support Unit of the Trinidad and Tobago Police Service (TTPS) hosted “Who’s Writing Your Story – Victim to Victor II”, yesterday at the Beetham Gardens Community Centre.

Moderated by Ms. Christine Forde, Victim and Support Officer Western Division, the second instalment of this series focused on young men in society. The audience comprised of Forms’ Two and Four students of the Morvant/Laventille Secondary School and the Russel Latapy Secondary School.

Ms. Janelle Sebastien Reyes, Victim and Support Officer, Port of Spain Division, delivered a brief overview of the Unit, which was established in 2008 as a part of the transformation of the TTPS, where she highlighted its responsibilities of providing support and counselling services to both victims and witnesses of crimes and various community outreach programmes. She then posed the question, “Who’s the author of your story?” to the audience which shaped the outline of the event.

The Manager of the Unit, Ms. Aisha Corbie, welcomed the young men to the session, with an empowering message of rising again and echoed an inspirational quote from Alexandre Dumas “life is a storm my young friend, you will bask in the sunlight one moment and be shattered by the rocks the next, what makes you a man, is what you do when the storm comes.”
She ended by saying, “we are delighted to add some tools to help you when the storm comes”, highlighting the position of the Unit’s support.

The event then featured a powerful line of male presenters, majority being from the various divisions of the Victim and Witness Support Unit. The speakers gave their expertise, but also delivered empowering messages as they spoke on their individual topics.

The first topic was; Society’s Perception of Boys/Men delivered by Mr. Rickel Dixon of the Eastern Division, where he touched on the sensitive topic of what is expected of a man from society, and various ways they can change how society perceive men and how they perceive themselves. He encouraged the young males in the audience to be open to learning as you are never too old to learn.

Mr. Justin Rodriguez of the Northern Division, spoke on Building Individual Strengths, giving the message of Communication, Honesty, Assertiveness, Resourcefulness, Adaptability, Creativity, Team player, Entrepreneur and Responsibility revealing the word CHARACTER, and addressing what it means as a man.

The penultimate speaker, Librarian III North Region, Mr. Azard Mohammed, gave another empowering message of reading stating “knowledge is power and power comes from reading.” He quoted the Redemption song and addressing the mental slavery that holds us back as individuals and urged the future men of the nation to break free from it. He reminded the audience that they have to write their stories and nobody can take that away from them.

Ms. Corbie closed the session, thanking the students and the staff of the schools for their participation, along with the TTPS Inter-Agency Task Force, Hearts and Minds for their continued support.