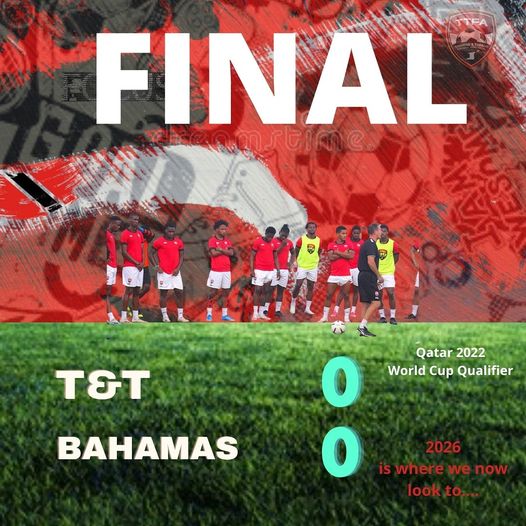 Regular Hexagonal participants Trinidad and Tobago suffered an unusually early exit from the 2022 World Cup qualifiers, after a shock scoreless draw against Bahamas at the Thomas Robinson Stadium in Nassau last evening.

Group F bottom side Bahamas, without a World Cup win for a decade, managed their first point of the campaign. With two draws and a single win, T&T can no longer catch St. Kitts and Nevis who will progress to Round 2 regardless of the outcome of Tuesday’s match between the pair.

TT needed a win to stay in contention in Group F, but Saturday’s result means the Soca Warriors have five points after earning one win and two draws. St Kitts/Nevis will advance as the group winner as the tiny Caribbean island are on nine points with one match remaining.

The match between TT and St Kitts/Nevis on Tuesday will be a warm-up match for the latter as they prepare for the next round of competition. TT squandered several opportunities against a well organised Bahamas outfit.
The Bahamas packed their defence which worked for the team ranked 201st in the world.

UNC: We are not against Blue Waters, but against Stuart Young 0

Carenage man tries to get loan with fake job letter 0