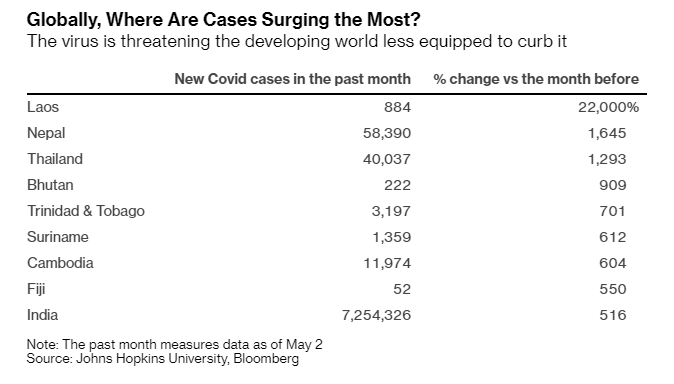 After all the warnings from government, Trinidad and Tobago has now found itself in a position it should not be in and is now ranked as the country with the fifth highest surge of COVID-19 cases over the past month.

This is according to figures from the Johns Hopkins University which have been quoted by a Bloomberg news report.

According to the figures in the report, TT has seen a 701% change in the number of new COVID-19 cases in the past month versus the month before.

Ranked by the change in newly recorded infections in the past month over the previous month, Laos came first with a 22,000% increase, followed by Nepal and Thailand, both of which saw fresh caseload skyrocketing more than 1,000% on a month-over-month basis.

Also on top of the list are Bhutan (909%), Trinidad and Tobago, Suriname, Cambodia and Fiji, as they witnessed the epidemic erupt at a high triple-digit pace.

India, which has been the centre of world media coverage ever since a startling surge in cases last month, is ranked 9th with a 516% change after recording over 7 million new cases in the last month.

“All countries are at risk,” said David Heymann, a professor of infectious disease epidemiology at the London School of Hygiene & Tropical Medicine. “The disease appears to be becoming endemic and will therefore likely remain a risk to all countries for the foreseeable future.”

According to the Bloomberg report, the virus is threatening the “developing world less equipped to curb it.”

Martin George: “Gov’t embarking on mandatory vaccinations despite denying they are!” 0