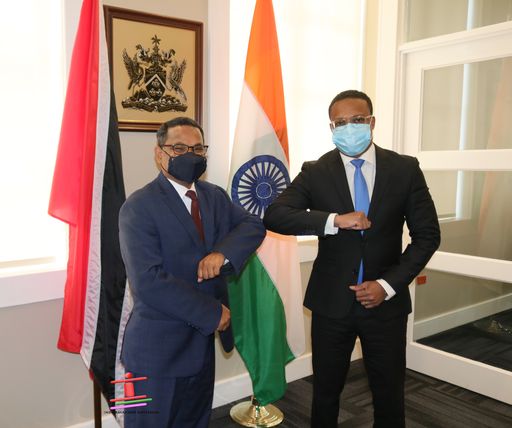 Trinidad and Tobago is set to work even closer with India in getting vaccines for this country.

This according to a joint statement issued by Foreign Affairs and Caricom Minister Dr Amery Browne and Indian High Commissioner Arun Kumar Sahu following a meeting yesterday at the Foreign and Caricom Affairs Ministry in Port of Spain.

Browne and Sahu stated discussions were held on recent developments, including the matter of access to vaccines, “and there was consensus that the two countries would work even closer together on this matter”.

Other sectors of interest were also identified for the enhancement of the bilateral co-operation between Trinidad and Tobago and India, such as pharmaceuticals and health care, information and communication technology (ICT), information technology enabled services (ITES), renewable energy and agriculture.

The statement further noted that they had very “candid, friendly and comprehensive” discussions on the bilateral relationship between the Trinidad and Tobago and India.
“The meeting was successful and conducted in the best interests of the long-standing ties that bind our two nations,” they stated.

The meeting came on the heels of tension between Prime Minister Dr Keith Rowley and Sahu.
Last Thursday, Rowley said Sahu never spoke to the Government about India’s vaccine gifts and had denied knowledge of any such programme.

And Sahu on Friday knocked Rowley’s “diplomatic decency”, saying “I don’t think it is in the pale of diplomatic decency to personally attack a resident High Commissioner.”
Browne then intervened and sought a meeting with Sahu.