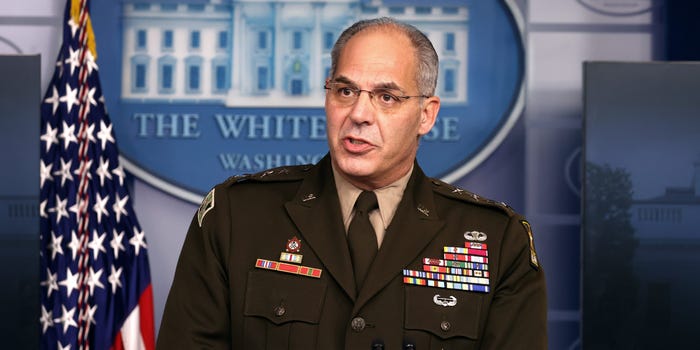 The army general in charge of distributing Covid vaccines in the US has admitted he failed over the initial number of doses promised to states.
Gen. Gustave Perna, the head of Operation Warp Speed, said he took “personal responsibility for the miscommunication” to state governors.

More than a dozen states have expressed alarm at a cut in the expected number.
The Pfizer-BioNTech doses are being rolled out following approval – and a Moderna vaccine is now also approved.

The US has registered more than 17.5 million of the 76 million infections confirmed globally since the pandemic began, along with 315,000 deaths. Both are the highest numbers in the world, according to Johns Hopkins University research.

“I failed. I’m adjusting. I’m fixing and we’ll move forward from there.”

US media said some states had been told the doses they would get next week would be lower.

The New York Times listed 14 states by name, including California, New Jersey and Michigan.
Governor Jay Inslee of Washington state tweeted on Thursday: “This is disruptive and frustrating. We need accurate, predictable numbers to plan and ensure on-the-ground success.”

Michigan Governor Gretchen Whitmer said the White House was “slow-walking the process”.
Gen Perna said: “Please accept my personal apologies if this was disruptive to your decision-making.”

Gen Perna said he did not know “with exactness” when all the vaccines available would be distributed.

The department of health and human services suggested the discrepancy could be between the number of doses manufactured, and the number actually ready for distribution, given that they have to undergo sterility and other tests.

Gen Perna said the newly approved Moderna vaccine would begin shipping out on Sunday and that he was on track to get a combined total about 20 million doses of the vaccines to states by the first week of January.

He said he hoped to get the system working “flawlessly”.
Both vaccines are said to be about 95% effective. The US vaccination programme aims to reach 100 million people by April.

About 5% of the US population are known to have been infected since the pandemic began.
Since mid-November, the seven-day rolling average of Covid-related deaths has soared from just over 1,000 to more than 2,500.

A number of states are overwhelmed. California is struggling to find beds for patients – some 17,000 people are in hospital, double the previous high in July.
About 130,000 people in the US have so far received vaccine shots in the biggest mass vaccination in US history.

The first tranche of 2.9 million doses will go to frontline health-care workers and long-term care facility residents, although this initial tranche will not cover those two categories in full.
Some 70%-80% of the US population of 328 million would need to be vaccinated to achieve herd immunity, officials believe.

The other key problem is a $900bn (£665bn) coronavirus economic relief package that has been stalled by months of partisan wrangling.
The latest stumbling block appears to be the complicated issue of emergency Federal Reserve powers. These are normally used to deal with market turmoil and the Republicans do not want Joe Biden to have the power to use them on Covid after he takes office on 20 January.
Democratic House of Representatives Speaker Nancy Pelosi insisted: “We’re right within reach.”