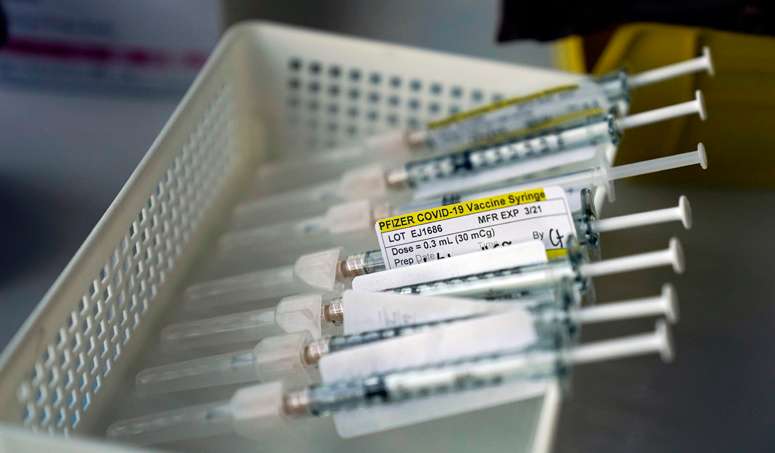 The Trump administration promised a reserved amount of second vaccine doses, but as COVID-19 cases continue to spike, those anticipated doses have evaporated.

According to CNN, second-round shipments—under the new policy—have already been distributed.

A senior administration close to the situation told the outlet that the Trump administration said it would be releasing those reserved doses on Friday. Still, it was soon discovered that many of those reserves were released into the system last year as production was gearing up.

The revelation goes against what Health and Human Services Secretary Alex Azar said earlier this week at an Operation Warp Speed briefing, that the administration would be “releasing the entire supply for order by states, rather than holding second doses in reserve.”

This is problematic for state officials who have been ordered by the federal government to distribute the vaccine.

The official who spoke with the news outlet pushed back on a Washington Post report that the second-dose supply was “exhausted.”

Instead, the source characterized the reserve as a rolling and replenished supply with new production and noted that the supply would be beneficial from those extra doses already in circulation. However, they did acknowledge that this means there will not be a quick increase in distribution numbers, as many people were led to believe.

Michael Pratt, a spokesman for Operation Warp Speed, also denounced that the supply was “exhausted.”

“This week, nearly 13 million total doses have been provided to states to order, millions more than other weeks, as the reserve of second doses is completely made available to order against,” Pratt said. “States have yet to order against their ordering caps fully. As stated this week, we have now moved to the phase where the full amount released to OWS is being made available to order, first to cover second doses, second to provide additional first doses.”

The announcement regarding the decrease in the distribution has blindsided many officials responsible for administering the vaccine.

“I am demanding answers from the Trump Administration. I am shocked and appalled that they have set an expectation on which they could not deliver, with such grave consequences,” Oregon Gov. Kate Brown, a Democrat, tweeted Friday. “This is a deception on a national scale. Oregon’s seniors, teachers, all of us, were depending on the promise of Oregon’s share of the federal reserve of vaccines being released to us.”

Azar received a letter from Oregon Health Director Patrick Allen recounting a call with Brown and the CEO of Operation Warp Speed, Gen. Gustave Perna, demanding that the HHS chief revise his statement on releasing the “entire” supply, given the new revelation.

“During that call, he informed us there is no reserve of doses, and we are already receiving the full allocation of vaccines,” Allen wrote. “If true, this is extremely disturbing and puts our plans to expand eligibility at grave risk. Those plans were made based on reliance on your statement about ‘releasing the entire supply’ you have in reserve. If this information is accurate, we will be unable to begin vaccinating our vulnerable seniors on January 23, as planned.”

During an interview with CNN, Allen called out Perna by saying that during the “awkward discussion“ with him, Perna tried to make it seem as if states had misinterpreted the administration’s plans while he also confirmed there was no physical stockpile of vaccines.

“I do not believe I misunderstood,” Allen said and confirmed that Oregon would have to delay its plan to vaccinate seniors on January 23 since no surge in the vaccine is available.

“It’s just so disappointing,” he continued. “People are desperate for the vaccine, and we have worked so hard to be able to expand who’s eligible, and to not be able to do it is just crushing right now.”

“Federal announcements that 2nd dose being held in reserve was going to be released led us to expect 210,000 doses next week, and other Govs made similar plans. Now we find out we’ll only get 79,000 next week,” he tweeted.

The bottom line, Dr. Marcus Plescia, chief medical officer for the Association of State and Territorial Health Officials, said is that the vaccine will remain limited for at least a few more weeks.

“We are hearing there is not a stockpile of vaccine for second dose but that it was more of a ‘paper exercise,” said Plescia. “The stockpile appears to be all on paper; they were tracking anticipated need but not actually holding back product.”

“I think the original message got lost in a lot of overpromising,” Plescia said. “Until there is a more robust supply, we need to be clear with the public that opportunity to get the vaccine is limited.”

People are stunned by the news, including Lori Tremmel Freeman, the CEO of the National Association of County and City Health Officials, who said her organization wasn’t informed about the scarce supply of the vaccine reserve and had to read about it in the news.

“It was a complete surprise,” Freeman told CNN, adding, “To hear that this had been done for several weeks was actually shocking to us.”

“I don’t know if the right hand knows what the left hand is doing here,” she said. She also noted that there’s a risk that citizens will not be inoculated correctly if the government isn’t able to provide reliable numbers for its vaccine supply.

Despite the vaccine being developed in record time, its distribution has been delayed because the Trump administration gave the responsibility to states to figure out vaccinating its population. But the administration’s inconsistent estimates on the number of vaccines has been problematic for conditions.

“The announcement on Tuesday from Sec Azar that HHS would be releasing the entire supply for order by states, rather than holding 2nd doses in reserve led us to believe that additional doses were available and would be forthcoming,” Claire Hannan, the executive director of the Association of Immunization Managers, told CNN and said that allocations to states have not gone up.

“State and local jurisdictions are eager for more doses to expand vaccination to older Americans while continuing to vaccinate health care and essential front-line workers,” Hannan added. “It is so critical that states get accurate estimates and allocations in advance so that they can plan for vaccine distribution and administration.”

Suspect in Bharatt’s case is dead 0