A truck driver, identified only as Wendell, was injured in a vehicular crash on Sunday morning.

Around 6:15 am, ‘Wendell’, who is employed with Wafiq’s Transport, was driving a company truck in Chase Village, when on reaching close to a triangle, his truck was hit head on by a blue Suzuki SUV.

Wendell sustained serious injuries to both his legs and is now warded at the Eric Williams Medical Sciences Complex in Mount Hope. 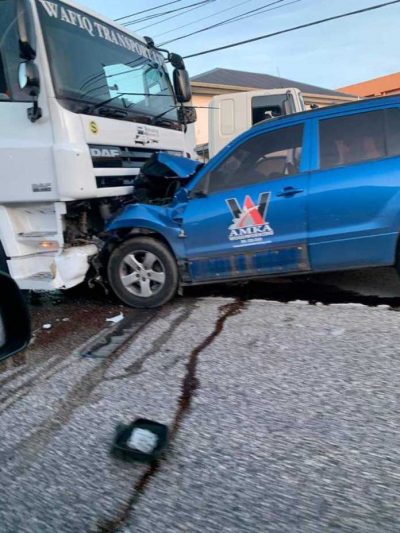 The condition of the driver of the SUV was not known.

The driver of the SUV was also driving a company vehicle belonging to Amka Woodworking Company in Cunupia.

A breathalyzer test was expected to be conducted on the driver.
Investigations are continuing