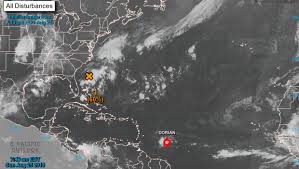 The Barbados Meteorological Services has issued a Tropical Storm Watch for Barbados.

This means tropical storm conditions are possible within the next 48 hours.

At 5:00 a.m. Tropical Storm “Dorian” was centered near 11.0N 51.6W or about 555 miles (890 km) east-southeast of Barbados. The system continues to move towards the west at 13 mph (20 km/h) and on this track, the center of Dorian is expected to pass over or near Barbados late Monday/early Tuesday.

Maximum sustained winds are near 40 mph (65km/h), with tropical-storm-force winds extending outward up to 25 miles (40 km) from the center. The minimum central pressure is 1008mb (29.77inches).

Sustained surface winds between 25 to 35 mph (40 to 55 km/h) with gusts to storm force are expected to spread across Barbados Monday afternoon and persist into Tuesday.

In addition, pockets of moderate to heavy showers, periods of rain and scattered thunderstorms are expected. Rainfall accumulations of at least 2 to 4 inches (50 to 100 millimeters) are possible late Monday into Tuesday with isolated higher amounts. As a result, some flash-flooding is likely in low-lying areas thus, residents are urged to be on the alert and take all necessary precautions.