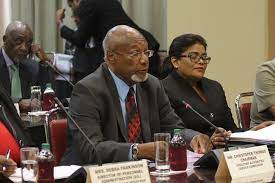 Tributes In The Senate To Former Ambassador Christopher Roy Thomas

Tributes in the Senate Tuesday on the passing of former Ambassador, 84 year old Christopher Roy Thomas.

His service to Trinidad and Tobago began when he entered the Foreign Service in 1967.

Within a year he was assigned to the Embassy in Caracas, Venezuela as a Second Secretary and was promoted to First Secretary by 1969.

In 1973, Ambassador Thomas was appointed Council of the Permanent Mission to the United Nations in New York.

In 1990, Ambassador Thomas was appointed as the Assistant Secretary General of the Organization of American States and there he began his service to the international community.

In the Senate Tuesday afternoon, speaking on behalf of the government bench, Minister of Trade and Industry, Paula Gopee Scoon, revisited the vast and wide ranging life of Ambassador Thomas in service people at various levels.

Opposition Senator, Wade Mark, describes Ambassador Thomas as an outstanding public servant who adopted a low key way in which he carried out his duties.

Meanwhile, Independent Senator, Paul Richards, said Ambassador Thomas has been described as a patriot, a statesman, a diplomatic, father, educator and gentleman to many.

Ellen DeGeneres to end her TV show after 19 years 0