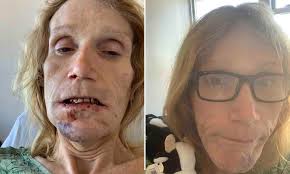 Transgender woman beaten after housed in jail with 3 men

A transgender woman who was arrested in San Diego last year was put in a holding cell with three men against her wishes and then beaten up so badly that she suffered a broken jaw, according to a lawsuit.

When Kristina Frost first arrived at San Diego Central Jail on November 25, 2020, she was placed alone in a holding cell, according to the lawsuit, which was filed last Tuesday and reviewed by Insider.

But later that day, the deputies moved Frost to a “minimally monitored” cell with three men, the lawsuit said.

The move was “against her wishes,” and Frost was “confused” as to why she was being transferred, given that her DMV records and driver’s license both said she was a woman, the lawsuit said. Frost also said that at the time of her booking, she had been wearing “feminine” clothes – high-cut shorts and a bra – the filing said.

She also said deputies there repeatedly misgendered Frost both in person and on official reports, the lawsuit said.

NBC News said that out of 4,890 transgender state prisoners tracked in 45 states and Washington, DC, it was able to confirm just 15 cases in which a person was housed according to their lived gender.

15-year-old missing at sea after falling off boat 0