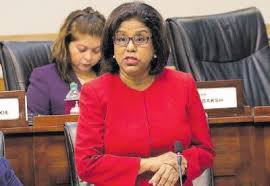 During the meeting, the companies apprised her on the rationale and benefits of the recently announced acquisition agreement by Seprod to acquire Bryden.

Present at the meeting were Ian Fitzwilliam, outgoing Chairman of AS Bryden, Mr. Paul B Scott, Chairman of Seprod, and Mr. Richard Pandohie, CEO of Seprod and interim Chief Executive Officer of AS Bryden.

The meeting also presented an opportunity for Minister Gopee-Scoon to share her views on the CARICOM Single Market Economy and how the deal underscores the regional efforts towards a more robust and competitive economic trading space.

Minister Gopee-Scoon said this is the latest in a long line of investments between these two countries; and that the agreement brings together two very strong, high-performing brands.

AS Bryden has a 100-year legacy in the region and is distributor for several premium global products.

Seprod is part of the Musson Group of Companies, a diversified holding company that owns controlling stakes in a number of public and private companies in the Caribbean and Central America.

Seprod assured the Minister that the company remains committed to manufacturing in Trinidad and Tobago and the acquisition will allow it to focus on key brands.

The CSME is designed to represent the region as a single economic space and is underpinned by common trade policies and agreements that position companies to negotiate and grow export potential.

The combination of Bryden’s interests with Seprod’s has created the leading integrated manufacturing and distribution group in the Caribbean.

State ordered to pay Kublalsingh and HRM $.5M in damages 0