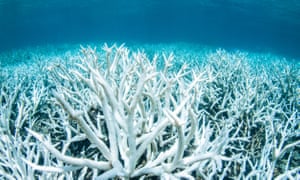 Tobago’s coral reef at risk due to coral bleaching

Tobago’s coral reefs are under duress as they face the very real threat of coral bleaching.

Coral bleaching occurs when the water temperatures are too warm or too cold, which forces the algae that are housed in the corals’ tissue to break down. When this occurs, the algae is released from the coral and causes it to turn white. This process, of changing colour, is known as coral bleaching. The algae is critical for the coral as it is one of the coral’s main source of food. When the algae is expelled, the coral suffers and may die.

In a release issued by the Institute of Marine Affairs, Trinidad and Tobago’s coral-bleaching stress gauge is at “watch level” which means that Tobago’s waters are above average sea surface temperature, especially during the July-August months. The US National Oceanic and Atmospheric Administration (NOAA) has predicted that our local coral reefs could remain at this level from August to November. However, during that time, Tobago’s coral reef alert could change to “Bleaching Alert Level One” which represents a high level of coral bleaching or “Bleaching Alert Level Two” which indicates extensive coral bleaching and eventual death of the corals.

Citizens are being asked to be on the lookout for bleached corals as this could affect the tourism in Tobago, since tourists usually use or waters for fishing a snorkeling. Bleached corals are usually pale in colour or bone white.

Scotia to reopen all its locations from June 1, at least temporarily 0