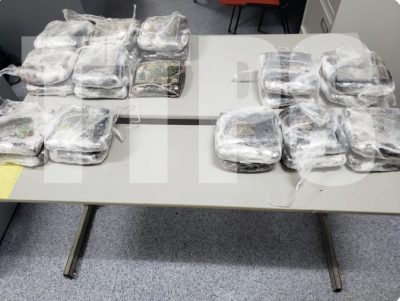 Three Venezuelan men are among five suspects arrested for possession of a quantity of marijuana, during an anti-crime exercise conducted in the Northern Division, yesterday.

Acting on information, the officers had cause to stop and search a motor vehicle with three male occupants which was proceeding along the Churchill-Roosevelt Highway in the vicinity of Mausica Road.

A search of the vehicle resulted in officers discovering approximately nine kilogrammes of marijuana. Two Venezuelan men and one Trinidadian man who were in the car at the time of the search were arrested in connection with the find.

The same party of officers then proceeded to Temple Street, Tunapuna, where they searched an apartment building, occupied by two men; one Trinidadian and one Venezuelan. The search resulted in approximately five kilogrammes of marijuana being found in the apartment.

The two suspects were also arrested in connection with the discovery.

The total drug find amounts to 14 kilogrammes and has an estimated street value of $140,000.

$2M was not spent on a virtual fete in Tobago 0