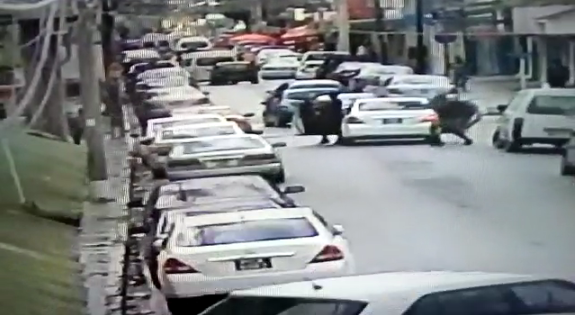 Three persons were shot and wounded by gunmen in downtown Port-of-Spain this afternoon. The search is on for the two shooters who may have been wounded in a subsequent exchange of gunfire with the police.

The incident unfolded around 2:25pm on Wednesday 15th January 2020, when gunmen in a car randomly opened fire on persons who were walking along Queen Street, Port-of-Spain. The car with the gunmen then drove off. A report was made to the police who responded and found three persons suffering from gunshot injuries. They were taken to the Port-of-Spain General Hospital for treatment.

An All-Points Bulletin was issued and a vehicle matching the make and number plate, was spotted along the Eastern Main Road, Laventille.

Officers attempted to intercept the vehicle, but its occupants opened fire on them. Officers, acting in accordance with the Minimum Use of Force Policy returned fire, but the suspects managed to escape. No police officer was injured during the exchange, but investigators believe that the gunmen were wounded. The vehicle was subsequently impounded.

The search is on for the gunmen.

UPDATE: Places of worship will now be opened from Thursday 11 June 0