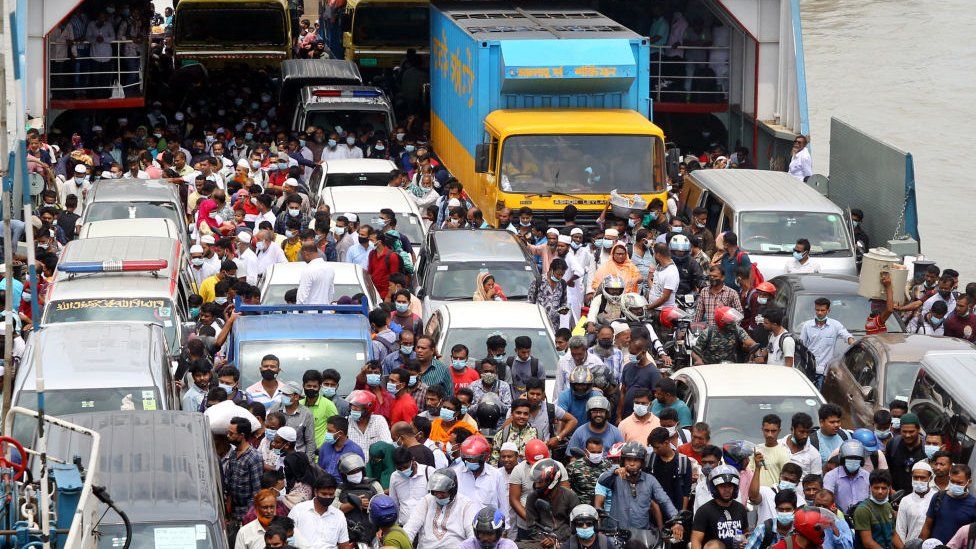 Crowds have flocked to Dhaka’s ferry terminals for a second day to get out of the city before a strict national lockdown comes into force.

For seven days from Thursday, no one in Bangladesh will be allowed to leave their homes unless in an emergency.

As a result, people are fleeing the busy capital city for their homes in towns and villages.

Covid cases in the country have surged, many linked to the Delta variant first identified in neighbouring India.

Many hospitals are overwhelmed with patients and are struggling to cope, particularly those on the border with India.

The lockdown was originally due to begin on Monday, but has now been postponed until Thursday – though officials said some restrictions will still come into force on Monday.

Because of the sharp rise in cases, rail and bus services are already suspended, with an exception for emergency services.

People hoping to leave the city have resorted to hiring private hire vehicles, or even walking, because of the transport closures.

Low-income workers and day labourers will be among the worst hit by the stringent lockdown, BBC South Asia editor Jill McGivering reports. Many of the people fleeing are migrant workers trying to get home.

Dhaka Tribune newspaper reported that there were thousands of people at just one ferry terminal, with little to no space between them.

Local traffic police chief Zakir Hossain told the paper that Shimulia terminal was much busier on Sunday than it was on Saturday, and that “no one is following Covid-19 safety protocols”.

AFP news agency reports that tens of thousands of people in total are trying to leave. It quotes a senior Bangladesh water official saying that at least 50,000 people had left the city on ferries on Sunday alone.

The situation, he added, had become “unmanageable”.

Some ferry services have been running 24 hours a day, with more than 1,000 passengers crammed onto each trip.

Police sub-inspector Mohammad Raza told AFP: “We don’t want them to overcrowd the ferry, but they don’t listen. There is a mad rush of people.”

A statement released by Bangladesh’s Press Information Department (PID) said all offices, including government, semi-government and private offices, would also shut in the lockdown.

Health department spokesman Robed Amin told AFP police and border guards would be deployed to enforce the lockdown and stop people from leaving their homes.

He added that the army could also be deployed if needed.

“It is a dangerous and alarming situation,” he said. “If we don’t contain it now, we will face an India-like situation.”

A second wave of Covid infections, driven largely by the Delta variant, devastated India in April and May. Although the country is beginning to reopen, experts have warned it could see a third wave in the next few months.