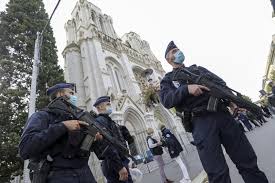 Two other men were arrested in connection with the knife attack in Nice. A 47-year-old man was arrested on Thursday. The investigators want to find out whether the attacker had accomplices.

After the fatal knife attack in Nice, which was classified as terrorism, two other suspects have been arrested. As the French news agency AFP reported on Saturday with reference to judicial circles, two men aged 35 and 33 have been in police custody since Friday.

The older of the two is said to have had direct contact with the alleged perpetrator the day before the attack. The other suspect was in the 35-year-old’s home during the arrest.

In the attack in the Notre-Dame church in Nice on Thursday, three people were killed by an attacker from Tunisia. The 21-year-old entered the EU with other migrants via the Italian island of Lampedusa in September. The alleged perpetrator was seriously injured by the police and is now in a hospital. He is said to have only appeared shortly before the attack in Nice. At first, he could not be questioned.

Tunisia’s authorities are also investigating the suspect. A judicial spokesman said that under Tunisian law, every Tunisian who is involved in acts of terrorism, whether at home or abroad, will be prosecuted.

In addition, it is to be determined whether the alleged perpetrator in Tunisia may have had accomplices.