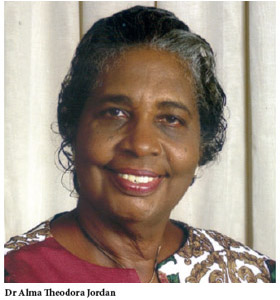 The St. Augustine Campus of The University of the West Indies mourns the passing of Dr Alma Jordan, Campus Librarian of its main library from 1960 to 1989, serving also as University Librarian from 1982 to her retirement in 1989.

Indeed, as part of this Campus’s 50th Anniversary celebrations in 2010, the main library was renamed the Alma Jordan Library in her honour and in recognition of her contributions to this country and the region.

Dr Jordan graduated with honours with a BA in Spanish from London University and held a Doctorate in Library Science from Columbia University.

She wrote extensively on Caribbean librarianship and recommended archival work for The UWI campuses.

She also served as part of a body responsible for formulating plans for the creation of the National Library and Information System Authority and was a foundation member of the national library association and first President (1969-70) of the Association of Caribbean University Research and Institutional Libraries.

In 1989, the Government of the Republic of Trinidad and Tobago presented her with the Hummingbird Medal (Gold).

Campus Librarian Mr. Frank Soodeen reflected that the staff at the Alma Jordan Library had been faithful in maintaining and developing Dr. Jordan’s vision, ideals, and core values.

She has been a leading light in the profession of Librarianship throughout the Caribbean and an inspiration to all of us who had the opportunity to interact or work with her during her career.