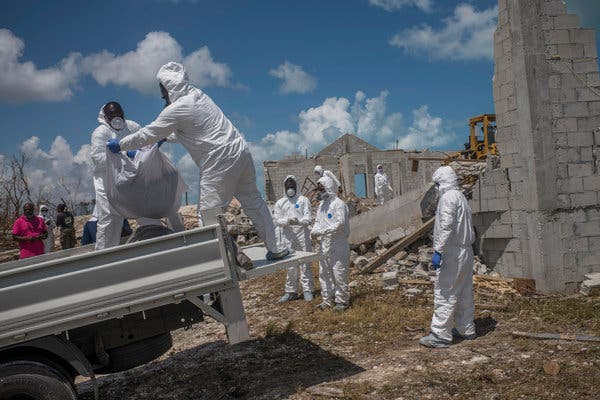 The Smell of Death Hangs Heavy in the Bahamas

The carnage is so widespread that even police officers can’t bear to see it.
“Police say they don’t want to go there. It’s too hard on them to go see their own people,” said Patricia Freling, a Florida nurse who’s volunteering in East Grand Bahama.“They think there will be a lot of bodies. So we are preparing for everything.”
Freling is part of a US medic team on an aid trip to Grand Bahama, a once gorgeous island of 51,000 residents before Dorian pulverised it.
The team includes paramedics, nurses, a counselor and a retired US Marine.
Mental health counselor Betsy Rosander is used to difficult circumstances. But today is different. “I think we are going to be seeing some real tough stuff,” she said.
The medical team is led by 29-year-old Brittany Reidy, a nurse determined to help survivors in the most ravaged areas. “Most people have not wanted to come here,” Reidy said. “But we said, ‘Take us to the worst part.’”
During the team’s hour-long drive from Freeport to the east end of Grand Bahama, the medics smell the carnage before they see it.“That is the smell of dead bodies,” Reidy said from the back of a pickup truck.
The official death toll across the Bahamas is 52. But that number is expected to skyrocket, with 1,300 people still missing two weeks after the hurricane.

Some may be trapped under mountains of rubble where houses once stood. Others may have been washed away in the storm surge, their bodies only recently surfacing on land.

“My fear is that if no one stacked the bodies, they might still be there,” said Tanya Steinlage, an emergency pediatric nurse practitioner.

Steinlage said the bodies she encountered had most likely washed up during the storm surges because there were no standing structures anywhere in sight. “They need to bring cadaver dogs out here to find them,” she says. “Right now, they are just (considered) missing.”

Grand Bahama Highway, a lifeline connecting the entire length of the island, was impassable in many places for days.

Now that the highway has been cleared, the medics can reach places where residents had been trapped.

They enter one house, but no one is inside. A water line on the wall suggests neck-deep ocean water had surged through the home.

“The smell in there is just the mold from all the water,” Reidy said.

Mold isn’t the only long-term health risk after the storm. In various parts of East Grand Bahama, the stench of sewage fills the air. There’s no running water, and the risk of infection is rampant.

Another survivor tells the team he saw four people get washed away during the hurricane. But like many other residents, they’re nowhere to be found.

“It’s tough,” Steinlage said. “We all went into medicine to help people. And when there are no living (people) to help, we have to redefine our sense of success.”

The medics hope many of the missing residents evacuated, either before or after the storm. But they fear many are dead.

By the end of their first day in East Grand Bahama, the medics identified at least 30 locations where they smelled corpses, even if they couldn’t see them.

Helen Perry, a nurse practitioner and Army veteran, said she hopes cadaver dog teams would come and find the bodies. If they don’t, the decomposing bodies could lead to a cholera epidemic.

Wife catches husband kissing another woman on the doorbell cam 0