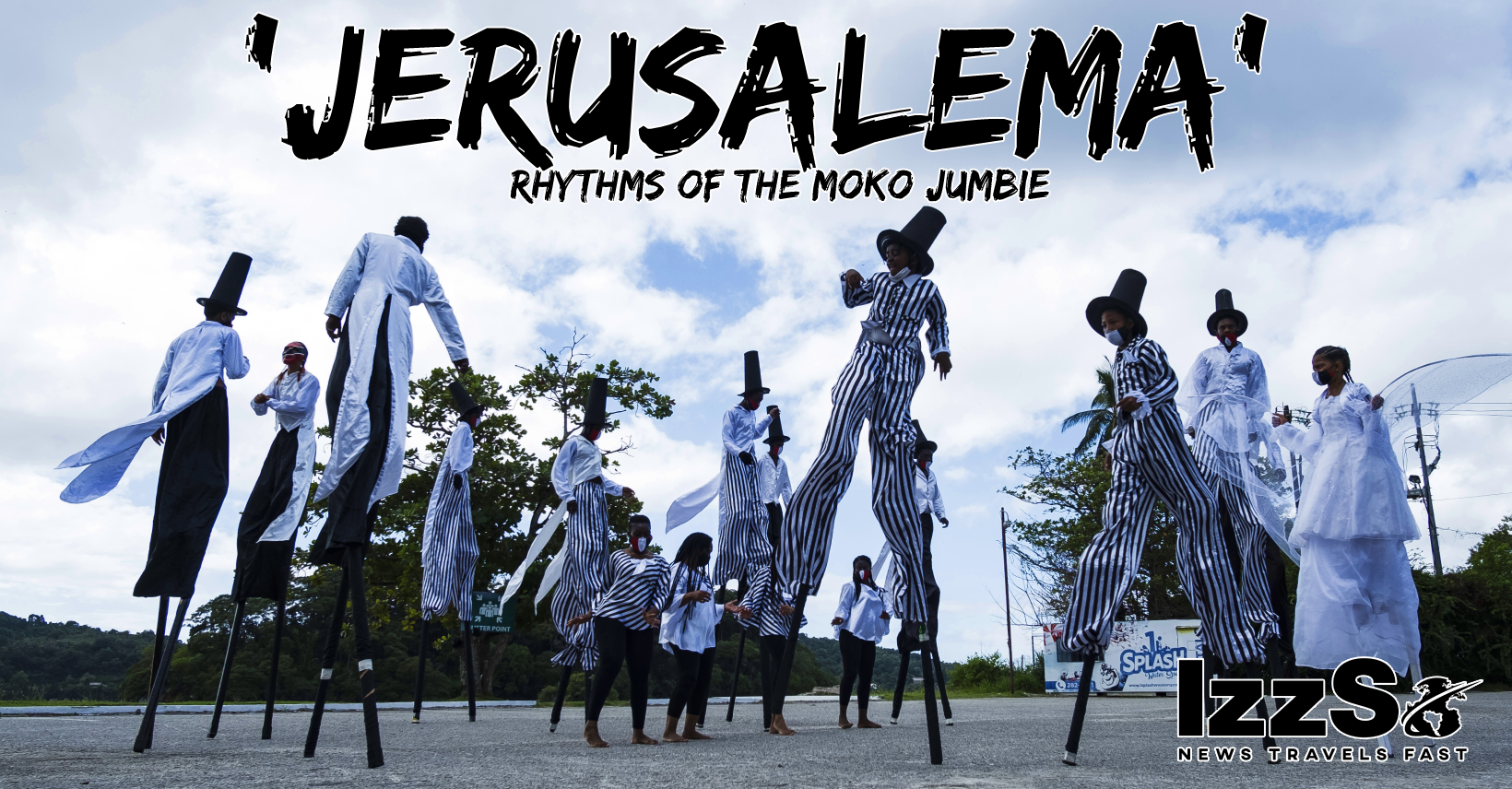 The ‘Jerusalema’ Rhythms of the Moko Jumbie

Over 150 million YouTube views and more than 4 million Shazams, these are the numbers garnered by the Limpopo native Master KG Kgoagelo Moagi’s “Jerusalema,” song, that we’re sure you heard in the maxi-taxi or even from your quarantined home.

Now the song has made its way to Trinidad, inspiring the imagination of Trinidadian creative’s Abigail Hadeed and Junior Bisnath who have embarked on producing a ‘trini’ Jerusalema version, titled the ‘Jerusalema Dance Story’, seeking to express a spiritual and joyous interpretation during a turbulent 2020 year.

Award-winning editorial photographer, artist and film producer Abigail Hadeed, has been curating and documenting cultural characteristics of the Caribbean and the Americas for several decades, and is responsible for producing this visual project, alongside San Fernando’s veteran, wood artist, Junior Bisnath, who is the Director of the Kaisokah School of Arts’ KAISOKAH MOKO – moko Jumbie group.

As to why they’ve decided to develop the concept of the Jerusalema Dance Story? Hadeed shared that, “The music was key and the feelings they inspired, were hard to pin down. Haunting, hopeful, sad, it spoke of loss but mostly it spoke of humanity and the reaching out to others in these times — the chance event of witnessing a sudden death triggered thoughts of the transience of life, and the need to acknowledge all those who pass.” 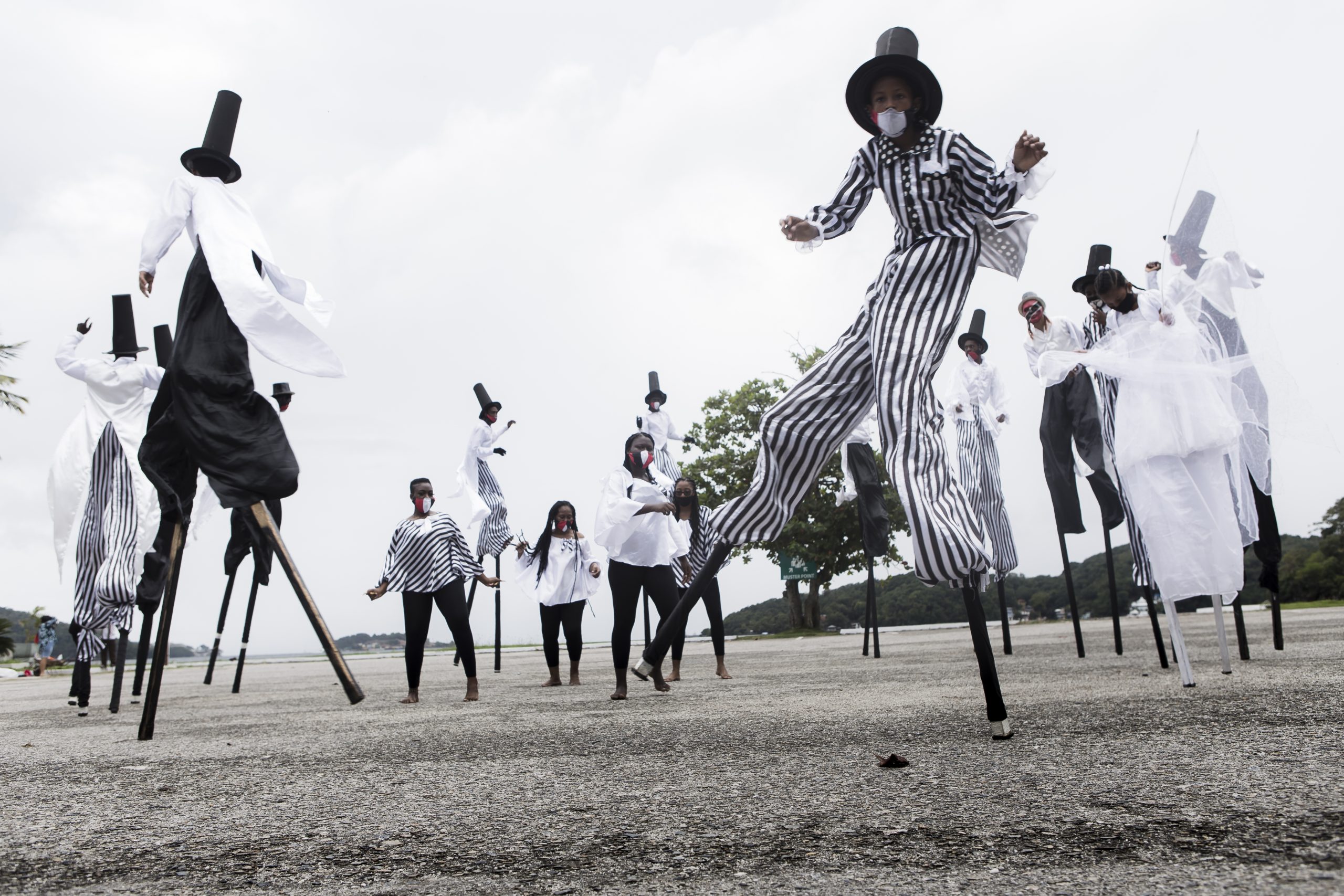 Jerusalema is undoubtedly embedded within the rich lyrical and artistic roots of South Africa, at IzzSo, we asked, how does the song relate to Trinbago’s cultural aspects and the use of Moko Jumbies?

“The Moko Jumbies preserved in our annual Carnival keep a stilt-walking tradition from West Africa alive. Later, when we co-opted a local choreographer, he pointed out that one of the sequences had a symbolic meaning in our folk dance. This video is Trinidad and Tobago’s tall-tall version for the Jerusalema challenge; a simple homage to lives lost, a requiem in these times of isolation and a lament for peace,” she explained.

Additionally, young people played a critical role and are the stars of the dance video. Under the creative director of Junior Bisnath, young persons were used simply because the “we felt it was important to give the children an opportunity to have some fun, allow them some social activities and hopefully encourage them and give them hope in the future,” said Hadeed. 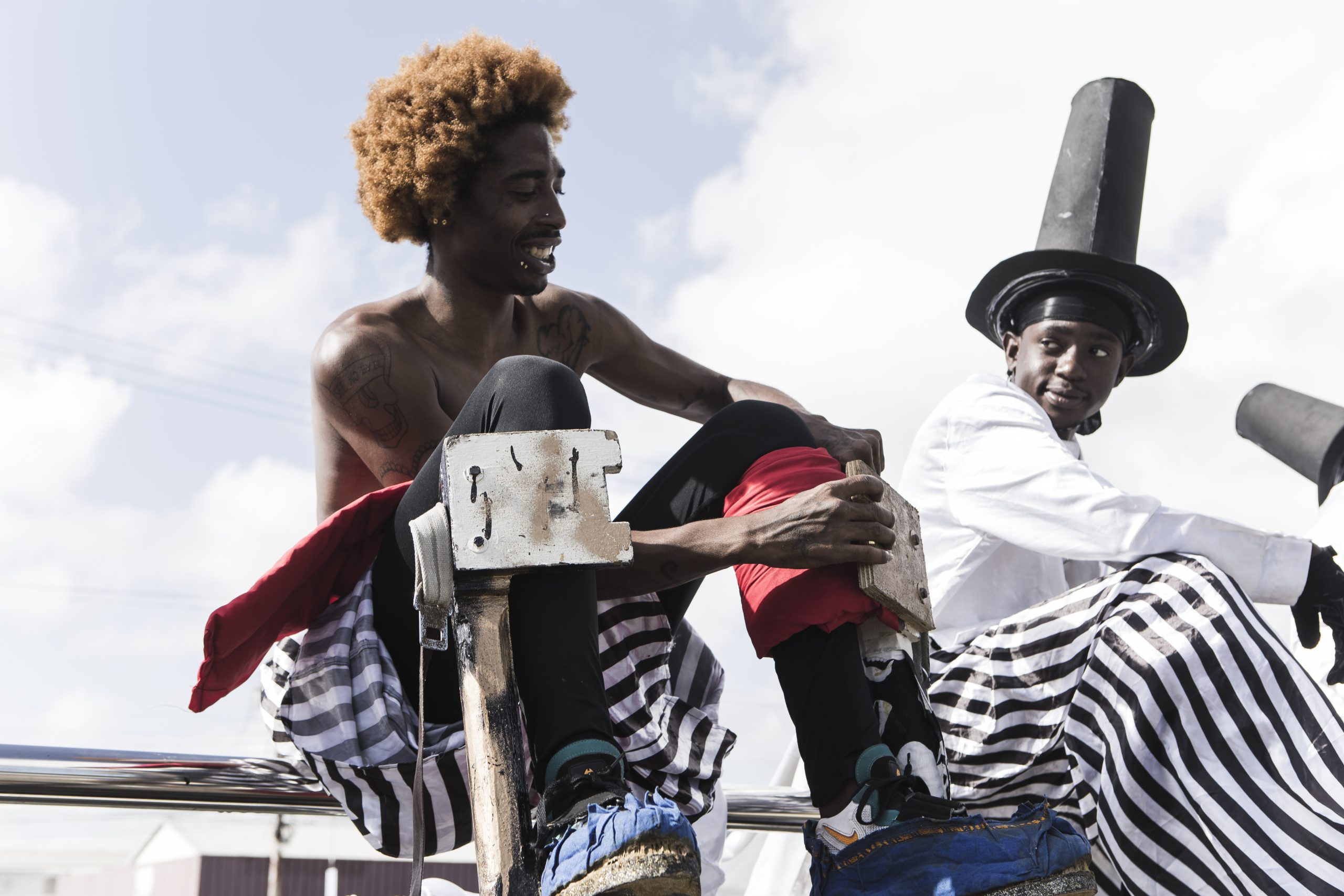 The visual story will feature Moko Jumbies clad in fancy black and white cotton stripped costumes accessorised with tall top hats. Filmed on an unknown open location with vast cloudy skies, which narrates a whimsical atmosphere that focuses on the majestic movements paraded by the Moko Jumbies to the rhythms of Jerusalema. 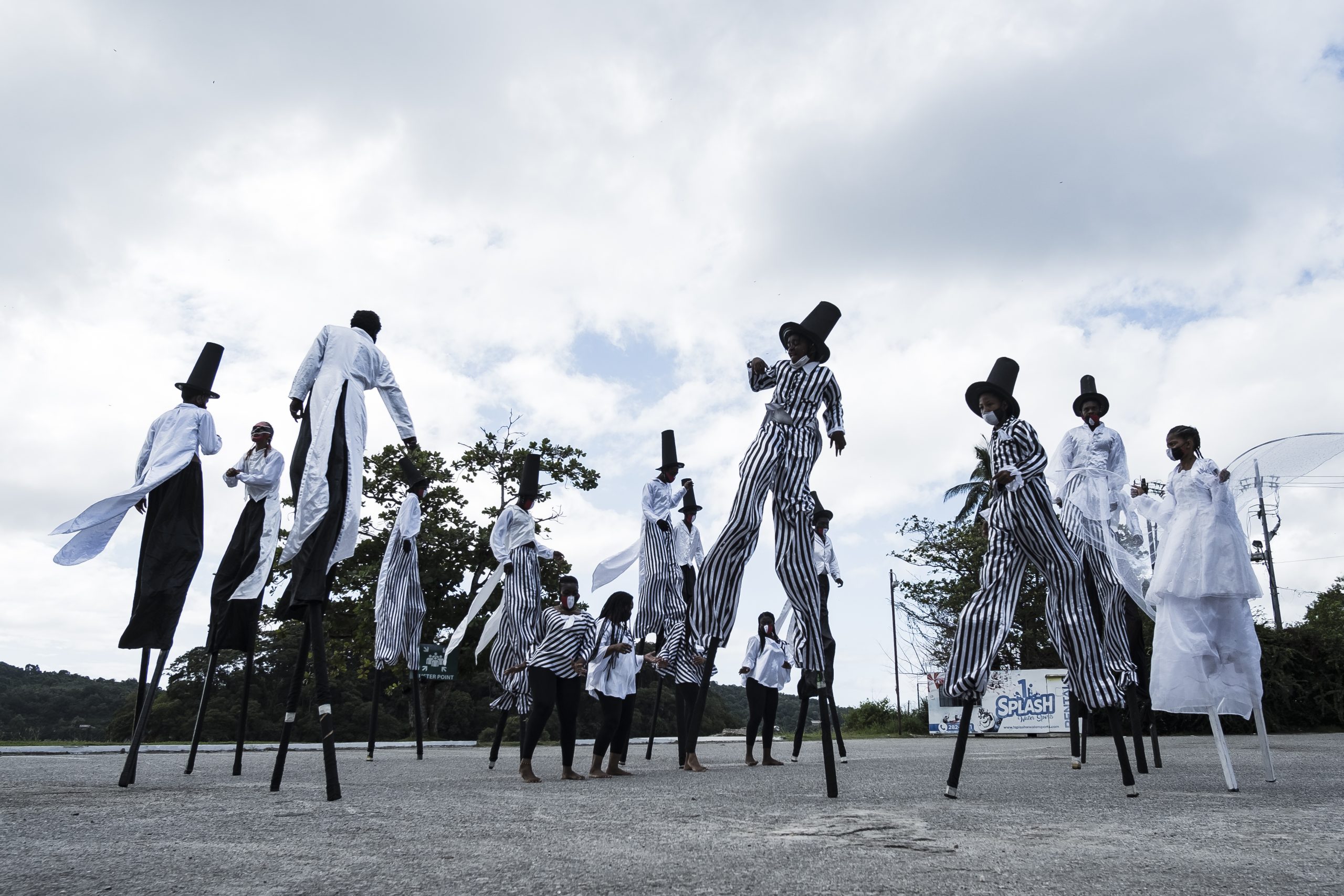 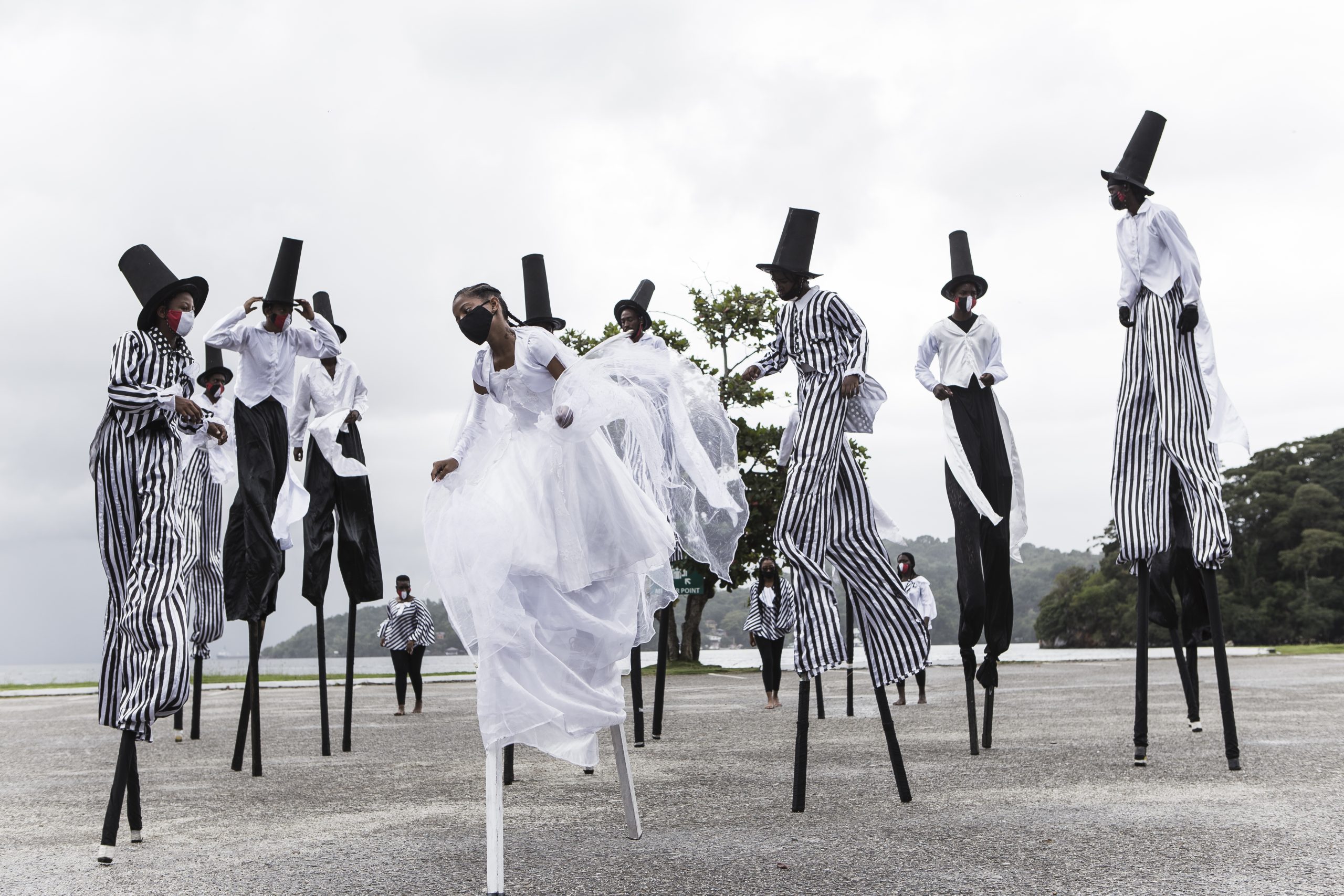 Jerusalema Dance Story was sponsored by Kisokah Moko Junior and his wife, Victoria and Splice Studios. They decided not to approach any huge companies or ministries, they wanted people to believe in what they were doing and to contribute genuinely during these difficult times.

Hadeed hopes that the four (4) minutes of visual and aural enjoyment, will engage viewers to welcome the new year of 2021 with a positive outlook.

For a unique, one-stop, multi-disciplinary creative space for photographers, filmmakers, musicians, artists, writers, programmers, architects and graphic designers (and anything in between!) to work, think, manifest creativity and be inspired. Visit Splice Studios for a list of services: https://www.splicett.com/services/