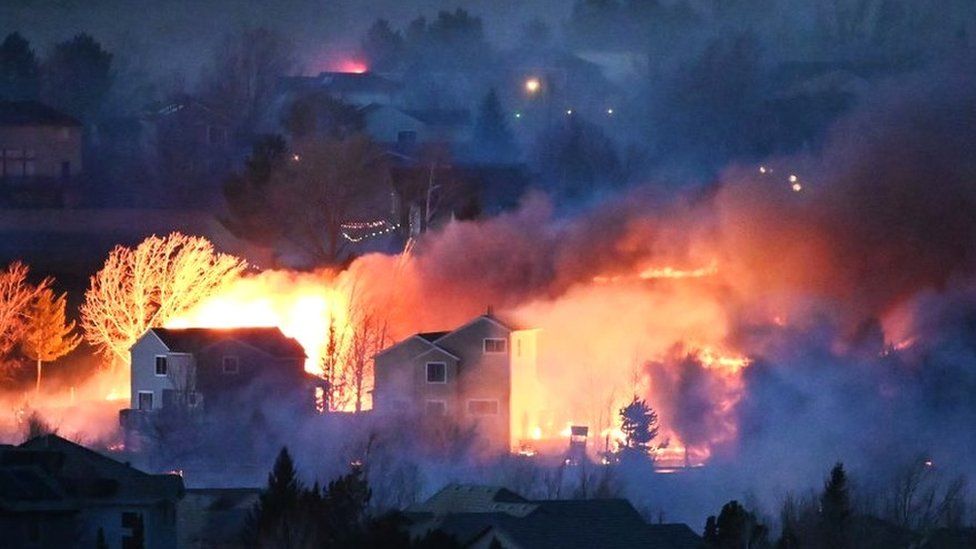 Tens of thousands of people have been evacuated and nearly 1,000 homes have been destroyed as wildfires spread through the US state of Colorado.

The fast-moving blazes are burning in Boulder County, north of Denver. Governor Jared Polis called it a “miracle” that no deaths had been reported. Some 30,000 people in the towns of Louisville and Superior were told to leave their homes on Thursday.A state of emergency has been declared.”

It was in blink of an eye. This was a disaster in fast motion, all in the course of half a day,” Governor Polis said in a news conference on Friday.”Nearly 1,000 homes are gone,” he added.

Winds of up to 105 mph (169 km/h) are fanning flames across the region amid a historic drought.While previous fires in Colorado have been in rural areas, these latest blazes are burning in more suburban parts of the state.
Thursday’s fires, named the Marshall Fire and Middle Fork Fire, are coming relatively late in the season.

At least some were sparked when power lines were toppled by strong winds, and they have quickly become the most destructive wildfires in the state’s modern history. Experts say that wildfires in western North America have grown more intense in recent years.

“This is our community so to watch it burn so quickly, so unexpectedly, is something that we are struggling to understand,” said Gov Polis, who added that President Joe Biden had called to say he would sign a federal emergency declaration.

Some 370 homes went up in flames west of Superior and 210 were lost in the Old Town area of Superior, Boulder County Sheriff Joe Pelle said.

A shopping complex and hotel were also destroyed, and about 6,000 acres were burned in total, the sheriff said.Snow had began falling near the fires on Friday morning, offering some reprieve to firefighters who say the remaining fires are expected to burn out shortly.

Neither of the two major hospitals in the area were affected, and all schools were “spared” from the flames, added Gov Polis.

Loading...
Newer Post
Nutrimix to increase their flour prices from Tuesday
Older Post
Opposition leader: Now more than ever we must not lose hope or faith

Dr. Rowley: No anti-media restriction in the Government 0