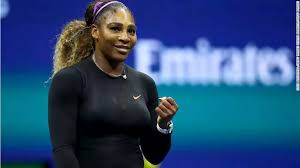 Tennis: Serena Poised for Multiple Record-Breakers at US Open Final

Tantalizingly close to tying Margaret Court’s record 24 Grand Slam titles, Williams is already tennis’ undisputed GOAT (Greatest of All-Time) in the eyes of her legions of adoring fans, with an ever-growing, odds-defying career and trophy case.

Of course, winning at the Arthur Ashe Stadium on Saturday would also mean breaking Chris Evert’s record of 101 U.S. Open wins, and her record of six U.S. Open title championships.

“At 17 I thought for sure I’d be retired at 28, 29, living my life,” said Williams after defeating fifth-seeded Elina Svitolina in straight sets under the lights of Arthur Ashe Stadium in the semi-final.

“The game has just changed, I think there’s so much more depth,” said Williams. “I think when I first started, you could win a lot of easy matches, then you’re in the quarterfinals, that’s when it starts to get a little more tough.

During the match, the Michigan-native sent down six aces, while making just one double fault, registered an impressive 86 percent win on her first serves. Serena also fired 33 winners and committed 20 unforced errors, and won four out of eight breakpoints.

Amid loud cheers from New York fans who filled the stands at Arthur Ashe Stadium, Williams waved euphorically at the crowd from the court after her victory that brings her a little closer to another Grand Slam title, something that has eluded her since her victory at the 2017 Australian Open finals.

Her return also holds significance in light of the unjust punishment imposed on Williams during her final last year against upstart Naomi Osaka.

Asked by reporters about the 2018 bout, however, a laser-focused Williams responded that it “hasn’t really crossed my mind.”

The mindset is reflective of her renewed concentration, with the six-times U.S. Open champion reiterating throughout the tournament the Spartan-like preparations she underwent to prepare for the stout talent at Flushing Meadows.

After losing in straight sets at the Wimbledon final to Simona Halep, Williams said she “knew I need to work harder, just do better.”

“I put a lot of time in the gym after Wimbledon, like I said, getting ready for Canada. Yeah, I put a ton of time in. Worked a lot on my fitness,” said Williams. “It always feels good to train without pain.”

After dismantling erstwhile rival Maria Sharapova in their highly anticipated first round, Williams has romped through the competition, save for a brief scare in her fourth-round match against Petra Martic, when she tweaked her right ankle.