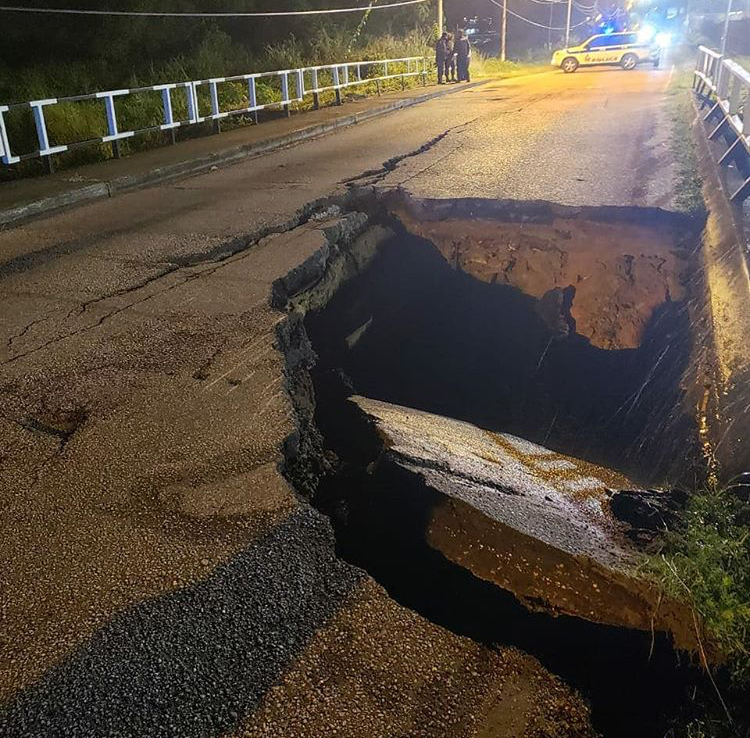 On Tuesday, the carriageway that spans the length of the B1/2 Bridge, Golden Grove Road collapsed making the roadway inaccessible to localized traffic.

The Ministry of Works and Transport said that it is mindful of the importance of this connector bridge as it serves as a main access point between the Churchill Roosevelt Highway and the Eastern Main Road.

As such, works are ongoing to restore unencumbered travel to drivers in the shortest possible time.

At a site visit on Wednesday, Minister of Works and Transport Rohan Sinanan, along with technical staff of the Highways Division and the Water and Sewerage Authority (WASA) toured the site to determine the most appropriate strategy to reopen Golden Grove Road.

Preliminary reports indicate that considerable age and erosion caused by recent weather patterns may have contributed to the destabilization of the structure.

The Ministry confirmed that works have begun on the construction of a single lane Bailey bridge as a temporary measure.

This will restore access to Golden Grove Road within the next three days.

As an alternative route, the Ministry of Works and Transport has granted authorization for Light Motor Vehicles to utilize the Priority Bus Route (PBR) from Arima Old Road to Orange Grove Road until further notice and Heavy Motor Vehicles can utilize the Eastern Main Road.

The Ministry will continue to provide updates to the public through its website www.mowt.gov.tt and social
media platforms.

The Ministry has apologized for any inconvenience caused.

Couple Tried to Have their Wedding at a $5.7M Mansion Believing it Was Vacant 0