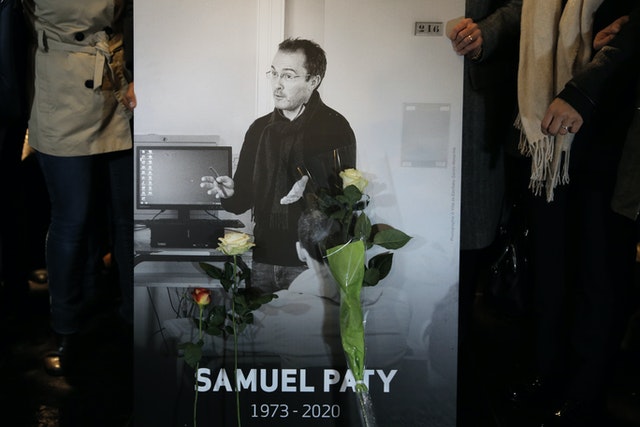 Samuel Paty was attacked and beheaded on October 16th, outside Paris, after showing a cartoon of the prophet Muhammad in a class on freedom of expression. Muslims believe that any characterization of the prophet is blasphemy.

The attack generated strong commotion and a wave of reaction from French society, which gathered in demonstrations across the country.

Prosecutor Jean-François Ricard said that a 14-year-old teenager and another 15-year-old are among seven people who turned up to an investigating judge on charges of “complicity in a terrorist murder” and “criminal conspiracy”.

“The investigation found that the perpetrator of the crime knew the teacher’s name, school name and address, but had no means of identifying him,” said the prosecutor. “This identification was only possible with the help of students at the school”.

“This is why the anti-terrorist prosecution decided to prosecute two minors under 18, whose implications in identifying the victim by the killer appear to be conclusive,” he said.

The killer was identified and shot dead by the police after the crime, but the investigation continues and pointed to the involvement of more people.

The other defendants include the father of a student who posted videos on social media calling for mobilization against the teacher and an Islamic activist who helped the man spread the messages, who identified Paty and gave the school’s address, according to the prosecutor.

Two more young men, aged 18 and 19, are accused of having helped the aggressor, accompanying him in the purchase of weapons (including a knife and an airsoft pistol). One of them took the killer, who lived about 90 kilometers from the school, to the location about three hours before the crime.

The last accused, 18, had close contacts with the attacker and supported radical Islam, said Ricard.

Also on October 21st, the regional newspaper “La Nouvelle République” (The New Republic, in free translation) said it had received threats on social media after publishing a cartoon of Muhammad on its front page.

A cartoon from “Charlie Hebdo” magazine, which was the target of a terrorist attack on January 7th, 2015, was republished in the Sunday edition of the periodical (18), after the professor’s murder.

An event in national memory to Paty is scheduled to be held this Wednesday evening in the courtyard of Sorbonne University.