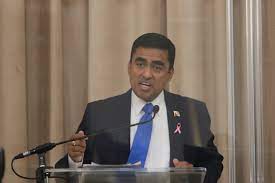 MP for Oropouche West, Davendranath Tancoo, said government should use the $7.5 million they wish to spend on Independence celebrations to better use.

In a statement on Saturday, Tancoo said, “Once again the Rowley government shows its total disconnect from the needs of the population. Earlier this week, PNM Minister of Housing and Urban Development Camille Robinson Regis announced that the government intends to spend $7.5 million to celebrate the country’s 60th anniversary of independence. This comes at a time when the same government claims that it does not have money to fix roads or to provide medication, medical treatment or life-saving surgeries to citizens, or food support for needy children.”

A few months ago, he said, the government claims to have spent $15 million to host a mini Carnival for a few persons to fete, wine and jam.

MP Tancoo stated that “The Minister of Finance Colm Imbert, seems fully able to find money to party but not to fulfil the needs of the population. I recommend that instead of spending the $7.5 million on celebrating, that the money be applied to patients requiring urgent heart and other life saving surgeries, properly fund the Children’s Life Fund, or fix the roads and drainage in Oropouche West.”

Tancoo lamented that “Today there are landlords threatening to evict councillors from offices because the Corporation does not have the money to pay overdue rents but the Minister of Finance and his Government are providing funding for cross-country concerts and fireworks display. This government’s priorities are completely screwed up.”

Among the proposed events for the month-long Independence celebrations are the traditional military parade and fireworks display, three cultural concerts, a roadshow to go on a cross-country concert tour, a Whitehall 3-D display with concert, several song and video competitions, multimedia art galleries at several locations and the unveiling of a Carlyle Chang art piece at the Piarco airport.

Tancoo had this message for the government, “Put food before fete and people before partying. Give citizens better roads, water supply, medical care and a safe place to educate and bring up their children. That would be the best celebration of our country’s Independence ever!”