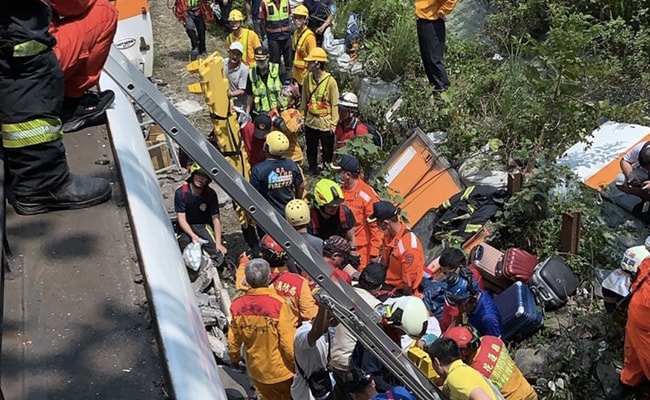 At least 50 people lost their lives when a train derailed in a tunnel in eastern Taiwan. With reference to firefighters, foreign news agencies inform about it. About 150 people were injured in the accident. According to local authorities, this is the worst railway disaster ever on this island south of China.

Nearly 500 people traveled by train from Taipei to Taitung in the southeast of the island. These were tourists and those who were trying to get home before the extended weekend.

An eight-car train derailed north of Hua-lien when it crashed into a truck. It fell on the track just at the mouth of the tunnel from the road at the construction site on a hill above the tracks. The vehicle apparently did not have the parking brake applied, no one was in it.

During the crash, some wagons tore, others are deformed, which complicated the rescue of rescuers. According to local media, many of them were standing on the train and the impact then threw them away. Among the victims of the disaster is a young train driver who has only recently married.

Part of the train is outside the tunnel. Televisions broadcast footage of rescuers carrying the wounded, as well as footage of passengers collecting suitcases and bags in a sloping, derailed wagon, while others emerged from the tunnel on the roof of the train. “It was like an unexpectedly sharp jerk. I fell to the floor,” the BBC server quoted one of the passengers as saying. “We broke down the window so we could climb to the roof of the train and get away,” she added.

A group of volunteers from a Buddhist foundation set up a tent near the crash site to help people who managed to get off the train on their own. They treated minor injuries and fed them.

In the afternoon, no one was trapped in the wreckage of the train, but firefighters said they had discovered human body parts, so the number of casualties could increase. So far, however, information on the number of injured differs – while the AP speaks of more than a hundred, Reuters reports about 146 people who have suffered injuries.

Authorities have begun investigating the cause of the disaster; according to the AP, there is no information that anyone has been detained in connection with the accident. Taiwanese Prime Minister Su Chen Changchang said the railway administration would be tasked with immediately inspecting the area around the tracks to prevent something similar in the future.

President Chai Jing-wen expressed its condolences to the families of the victims. Condolences were sent to Taiwan by China, which considers the island state to be its rebellious province.

Reuters reports that the line from Taipei along the east coast, which is popular with tourists for its mountainous landscape, is known for its large number of tunnels. The line between Taipei and Hua-lien has been in operation since 1979. The express that crashed on it today can travel at speeds of up to 130 kilometers per hour. Many visitors prefer to travel to eastern Taiwan by train because they want to avoid mountain roads.

The last time Taiwan experienced a major rail accident was in 2018, when a train set derailed in a curve. At least 18 people died and 175 passengers were injured. An estimated 64 people died in 1948 when a train in the north of the island caught fire, Reuters reports.

People in Taiwan and other Asian countries will celebrate a holiday on Sunday, visiting the graves of their loved ones and cleaning them in cemeteries. They also pray to their ancestors and make ritual sacrifices, such as traditional dishes. They light incense sticks or ceremonial papers.