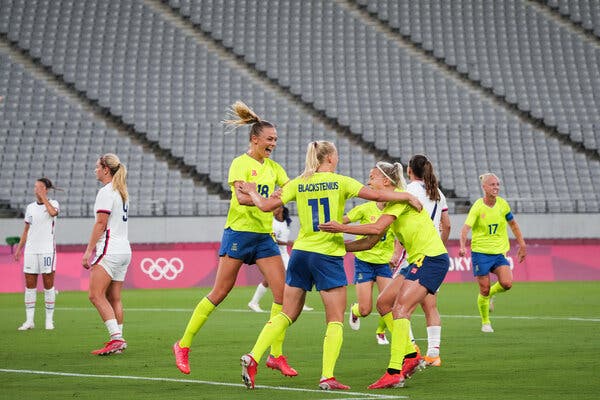 United States forward Megan Rapinoe said they “got bopped” and did “dumb stuff” as they lost their opening match to Sweden at the Olympic Games.

The world champions were stunned 3-0 in Tokyo with striker Stina Blackstenius scoring twice, before substitute Lina Hurtig added a third for Sweden.

It ended a run of 44 games unbeaten for the USA coming into the Olympics.

“I thought we were a little bit nervous, a bit tight, doing dumb stuff,” Rapinoe said.

The USA were knocked out by Sweden, who went on to win silver, on penalties in the quarter-finals five years ago.

US coach Vlatko Andonovski added: “It’s obvious we put ourselves in a big hole, but we’re the only ones who can get ourselves out of it.

“It’s not going to be easy. We’ve got to get positive results in the next two games, but the fact there is still a chance [means] I know this team is not going to give up.”

Elsewhere, 104th-ranked Zambia lost 10-3 on their Olympic debut in women’s football against European champions the Netherlands.

Zambia captain Barbra Banda also scored a hat-trick despite being on the losing side.

She became the first player to score in five consecutive Olympics, taking her total tally to 12, while 43-year-old defender Formiga extended her record of competing in all seven women’s Olympic tournaments since women’s football was introduced in 1996.

Team GB got off to a winning start thanks to a double from Ellen White as they comfortably beat Chile 2-0 in their Group E opener.

Sinclair extended the all-time international goals record to 187 and became only the fourth player in history to reach 300 games for her country.

In the final match of the day, Australia recorded a 2-1 win over New Zealand as Chelsea striker Sam Kerr scored one goal and provided an assist for the other.