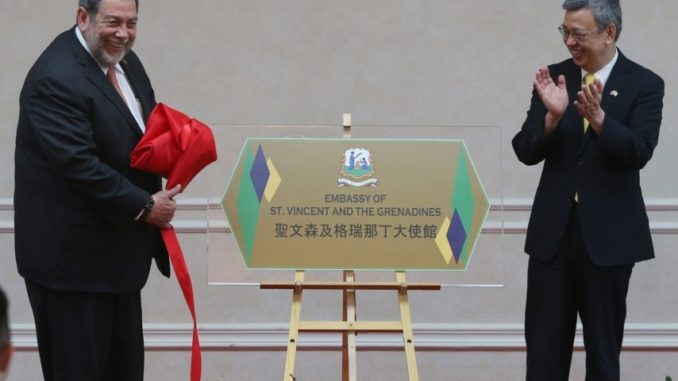 The plaque for Saint Vincent and the Grenadines’ new embassy was unveiled on Thursday (August 8) by the Caribbean nation’s prime minister, Ralph Gonsalves.

“I expect the new embassy will contribute to a further strengthening of relations between our two countries, and add great values to the bilateral diplomatic ties,” remarked Gonsalves.

The prime minister is visiting Taiwan this week for the inauguration of the embassy, and meetings with Taiwanese officials, including President Tsai Ing-wen.

The embassy, previously a consular office, is located in a building that accommodates a number of other embassies belonging to Taiwan’s Pacific and Caribbean allies.

“The embassy bears testament to the fact that our bilateral relations have reached a major milestone, thereby opening a new chapter in our future cooperation,” said Vice President Chen Chien-jen.

The Taiwan government looks forward to working with its Vincentian counterpart to promote the sustainable development of both countries and the well-being of their people, said Chen.

He added that he anticipated a deepening and more diversified partnership in the future through the efforts of St. Vincent’s ambassador in Taiwan, Andrea Bowman.

The newly opened embassy in Taiwan is the fifth one St. Vincent has established around the world, demonstrating “the high regard” the two countries have for their diplomatic relations, according to Gonsalves.

He called for more cooperation in dealing with the volatility of global politics and economy and the challenges of climate change in the pursuit of security, sustainability, and mutual prosperity.