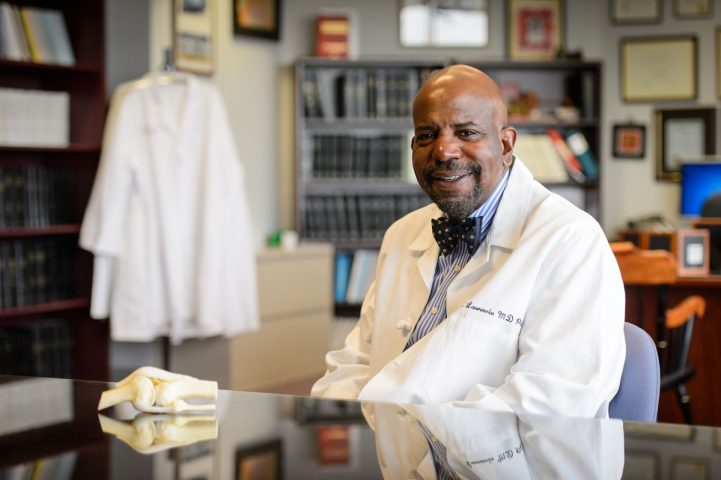 The Simon Ramo Founders Award will be presented to Cato Thomas Laurencin for his research contributions and leadership in engineering.

The Arthur M. Bueche Award will be given to Roderic Ivan Pettigrew for his contributions to technology research, policy, and national and international cooperation.

Laurencin is being recognized with the Simon Ramo Founders Award “for fundamental, critical, and groundbreaking scientific advances in the engineering of tissues, guiding technology and science policy, and promoting diversity and excellence in science.”

The award acknowledges outstanding professional, educational, and personal achievements to the benefit of society and include a commemorative medal.

He is a professor of chemical and biomolecular engineering, materials science and engineering, and biomedical engineering; the Albert and Wilda Van Dusen Distinguished Endowed Professor of Orthopaedic Surgery; and chief executive officer of the Connecticut Convergence Institute for Translation in Regenerative Engineering.

He has produced seminal studies in a number of areas of engineering and science. He and his colleagues were the first to develop nanofiber technologies for tissue regeneration, and his group pioneered the development and understanding of polymer-ceramic systems for bone regeneration.

In 2014, Laurencin was selected for the National Medal of Technology and Innovation, the highest honor bestowed in America for technological achievement, presented by the president of the United States, “for seminal work in the engineering of musculoskeletal tissues, especially for revolutionary achievements in the design of bone matrices and ligament regeneration.”

He has received the National Institutes of Health (NIH) Director’s Pioneer Award and the National Science Foundation (NSF) Emerging Frontiers in Research and Innovation Grant Award for his field of regenerative engineering.

He is the recipient of the Philip Hauge Abelson Prize from the American Association for the Advancement of Science “for signal contributions to the advancement of science in the United States.” He has served in leadership positions at NIH, NSF, and the FDA.

The mission of the NAE is to advance the well-being of the nation by promoting a vibrant engineering profession and by marshaling the expertise and insights of eminent engineers to provide independent advice to the federal government on matters involving engineering and technology.

The NAE is part of the National Academies of Sciences, Engineering, and Medicine, an independent, nonprofit organization chartered by Congress to provide objective analysis and advice to the nation on matters of science, technology, and health.