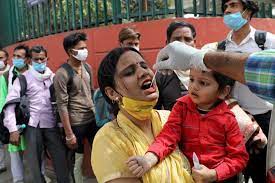 Major Indian states that have been virus hotpots are easing restrictions as Covid case numbers continue to fall.

National capital Delhi and financial hub, Mumbai, are among the cities that are opening partially.

This comes in the wake of a crushing second wave that saw hospital beds, medicines and even oxygen run short as cases spiked and deaths rose.

But experts continue to advice precaution amid a lagging vaccine drive and the threat posed by new variants.

India has administered more than 230 million jabs of a Covid vaccine so far – but less than four percent of it’s 1.4 billion people have been fully vaccinated.

It has also struggled to speed up the drive across the country, partly because of a botched roll-out that saw demand outstrip supply.

Among other things, it allowed higher prices for jabs in private hospitals, which has skewed access heavily in favour urban areas and those who can afford to pay. Vaccine hesitancy too remains a challenge, especially in rural areas.

India reported about 101,000 new infections on Monday and more than 2,400 deaths – far lower than the nearly 400,000 daily cases it was recording about a month ago. It has registered some 28 million cases and 349,000 deaths so far, but experts say the actual toll is far higher.

Despite the drop in case numbers, not all states have chosen to reopen. Rajasthan in the north, and Karnataka, Kerala Tamil Nadu and Telangana in the south have all extended lockdowns until the middle or end of this week.

Even those that have reopened – Uttar Pradesh, Maharashtra, Haryana – are doing so cautiously, in phases and with conditions.

Delhi’s chief minister, Arvind Kejriwal, said more restrictions will be announced if case numbers continue to fall, adding that his government is preparing for a third wave.

The Delhi metro, India’s largest rapid transport system, for instance, resumed operations on Monday at half its capacity. The city’s shops will take turns to open on alternate days to limit crowding at markets or inside malls.

In Mumbai, shops and restaurants can reopen but malls and cinemas will remain shut. Local trains, considered the lifeline of the city, will run only for a few hours.

In Uttar Pradesh, Covid restrictions have been lifted in all but a few districts. But curfew will continue every night and on weekends. Haryana state has allowed shops, malls and places of worship to open – but the last cannot allow more than 21 people in at a time. Weddings, funerals and social gatherings have also been permitted for groups of 21.