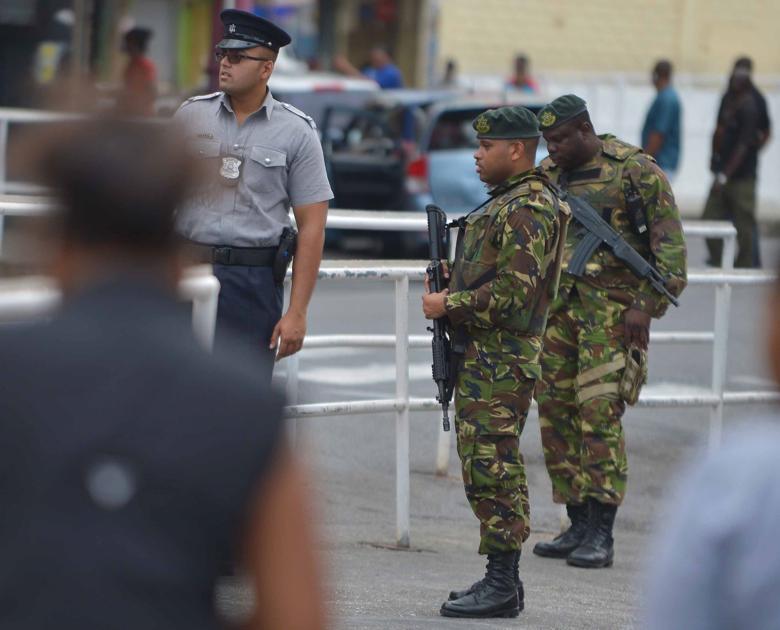 SOE regs: TTDF now has powers of a police officer

Office of the Attorney General issued the Emergency Powers Regulations, 2021 which gives insight into a host of items, regulations and general powers given to both members of the TTPS and the Trinidad and Tobago Defence Force.

These Regulations may be cited as the Emergency Powers Regulations, 2021.

The Commissioner of Police or a person authorized by him in that regard, may for the purposes of ensuring the protection of public health, public safety or to public order–
(a) prohibit or restrict the possession or use by any person or body of persons of any specified articles;
(b) prohibit any person from travelling except in accordance with permission given to him by such authority or person as may be specified; and
(c) require any person to quit any place or area or not to visit any place or area.

(2) The Commissioner of Police may give directions in respect of matters under sub-regulation (1) through Standard Operating Procedures for the Police Service.
7. (1) Where a police officer considers that a number of people are gathered together in contravention of these Regulations, the police officer may, in addition to his power to arrest and charge such persons, alternatively–
(a) direct the gathering to disperse;
(b) direct any person in the gathering to return to the place where he is living; or
(c) remove any person from the gathering.
(2) A police officer exercising the power in subregulation (1)(c) to remove a person from a gathering may use reasonable force, if necessary, in exercise of the power.
(3) Where a person who is in a gathering in contravention of a restriction referred to in sub-regulation (1) is a child accompanied by a person with responsibility for the child–
(a) the police officer may direct the person to take the child to the place where the child is living; and
(b) that person shall, so far as reasonably practicable, ensure that the child complies with any direction or instruction given by the police officer, to the child.
Publication of Orders, Notices, etc., under these Regulations Powers exercisable by the Commissioner of Police

(4) Where a police officer has reasonable grounds to believe that a child is repeatedly failing to comply with a restriction referred to in subregulation (1) the police officer may direct the person with responsibility for the child to secure, so far as reasonably practicable, that the child complies with the restriction.
(5) For the purposes of this regulation a person is a person with responsibility for a child if the person–
(a) has custody or charge of the child for the time being; or (b) is the parent or guardian of child.
8. (1) Notwithstanding any law to the contrary, a police officer may arrest without warrant, any person who he reasonably suspects has acted or is acting or is about to act in a manner prejudical to public health, public safety or to public order or to have committed or is committing or is about to commit an offence against these Regulations.
(2) A police office under subregulation (1), may take such steps and use such force as may appear to him to be necessary for affecting the arrest or preventing the escape of such person.
9. Where under these Regulations a female is searched, the search shall be conducted by another female.
10. The person having control of a motor vehicle in motion or driving a motor vehicle, shall, on being required to do so by a police officer in uniform, stop that motor vehicle.

11. (1) Notwithstanding any law to the contrary, the Chief of the Defence Staff under the Defence Act, shall hold his forces in readiness to assist, and if called upon by the Commissioner of Police, cooperate with and assist, the Commissioner of Police in the performance of his duties under these Regulations.
(2) A member of the Defence Force referred to in subregulation (1), shall, for the purposes of these Regulations, have the powers of a police officer and shall, where acting in accordance with any general or special instructions of the Chief of the Defence Staff or of any superior officer of that force given in pursuance of subregulation (1), be deemed to be acting in performance of the duties imposed on a police officer by these Regulations or by any Orders made thereunder.”